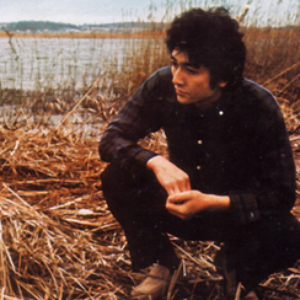 友川かずき (Kazuki Tomokawa) (born February 16, 1950, birth name: Tenji Nozoki, 及位典司) is a prolific Japanese musician, active in the Japanese music scene since the early seventies. He is often described as a "screaming philosopher". Multi-talented Kazuki Tomokawa (singer, author, actor, painter, raconteur) remains curiously unappreciated in the West, in spite of creating some of the most consistently inspired, emotionally resonant outsider folk music of recent years. Whether screaming his lungs out while thrashing his guitar within an inch of its life (his legendarily wild performances frequently end up with all strings snapped during a single song), creating gorgeously romantic and limpid tone-scapes, Tomokawa never remains any less than himself. He walks a path of untutored intelligence, piercing sensitivity, and fully exorcised passions all too rare in the shallow husk of today's debased world. As of recently, his music has been used in the films of cult directors Takashi Miike and Koji Wakamatsu, and he also appears in person in Miike's Izo (2004). Japanese poet Satoru Nozoki is his brother. Read more on Last.fm. User-contributed text is available under the Creative Commons By-SA License; additional terms may apply.