Above The Golden State 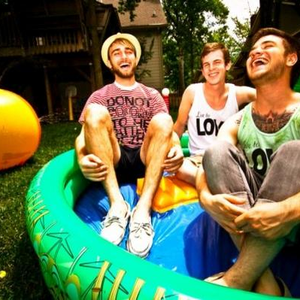 For Michael Watson, songwriter and lead vocalist of Portland, Oregon- based band Above the Golden State, there has never been an inkling of doubt as to why he is doing what he is doing. In no uncertain terms, he explains: “Music is from God and for God. And I believe God is raising up a new generation of young musicians who want to see music being used for its original purpose—to glorify God.” Lush, moving, and wildly infectious, you can sense that there is something beyond the ordinary surrounding Watson and his songs. Though admittedly he is a relative newcomer to the industry, his sound echoes with a seasoned quality that is rare. It takes only a thirty-second visit to the band’s Myspace page to experience it … accessible pop melodies with layers of instrumentation, driven by acoustic guitar but lifted by drums and various keys and programming. But don’t let the singer/songwriter tag lead you astray. These are not self-indulgent dirges, or art for art’s sake. The songs on Above the Golden State’s debut are as uplifting as they are accessible, as worshipful as they are radio-friendly. Watson explains, “One of my favorite quotes is from renowned pastor and author A.W.Tozer: ‘The esteem of the world isn’t worth the effort.’ That sentiment describes my focus with this music. I know the only thing that carries on to eternity is God being glorified in and through us by the grace of Jesus, so we’ll put all our energy toward that.” Watson’s journey began with unlikely circumstances. He was studying at Calvary Chapel South Maui when a good friend in another popular music act slipped his demos to an A&R representative with industry powerhouse Sparrow Records. Soon after, Michael received a random phone call from Sparrow. That was all it took. The song demo that landed him a record deal— “Sound of Your Name”—has become the first single on his self-titled debut. And it’s more than just an obvious single; it is evidence of anointing. Watson proclaims, Towers fall and Kingdoms crumble. Mountains bow and the earth will tremble at the sound of Your name. The strong man falls to Him who humbles. The plans he made were bound to stumble, and only You remain. From a lyrical standpoint, Watson balances the vulnerable and the personal with the scriptural. His musical formula combines heartfelt verses with down-to-earth choruses driven home by solid, universal Biblical concepts. On “Loud and Clear” he deals with the idea that worship is not just about singing, but about living: Life is an offering inside of this heart beat. Today is a new song,. Every verse is a new thought. Every breath is a chorus. My life is ascending. And on “Gaze Into Your Eyes,” he reflects again on Tozer and his work The Pursuit of God: In front of me is the figure I long for. I will turn to see no one else. I’m consumed by Your grace and wonder. I’m finding You as I loose myself. Every word is deeply spiritual and will not just provide the backdrop for a memorable sing-along but will also leave you reflecting on the state of your soul. Watson is backed by Brook Mosser (drums) along with Tim Aylward (keys), and all three are familiar to the music scene. Each of the guys has partnered at one time or another with everyone from Telecast to Falling Up to Kutless to Shawn MacDonald to Paul Wright. This is a seasoned crew, to say the least, and one that complements each other through shared sonic experience. When asked about goals, Watson simply states that he wants to go as far as heaven will take Him. With such a unique live show, though, it is not hard to imagine that Above the Golden State’s sphere of influence will expand quickly. One part worship, one part pop show, and one part spoken interaction, Watson and company plan to give audiences plenty to take home with them, beginning this fall as part of Starfield’s “I Will Go” tour . “Above The Golden State has no desire to bring glory to itself but to join in with you and everyone else to glorify God together. We know not to find our worth in anything other than Jesus Christ. We are in this together. We are the church, the body of Christ; this music is to fix the ‘gaze of our soul’ on Jesus, our Hope of Glory! These songs are meant to be sung in the heart and mind of the listener, like a soundtrack to our lives.” Read more on Last.fm. User-contributed text is available under the Creative Commons By-SA License; additional terms may apply.