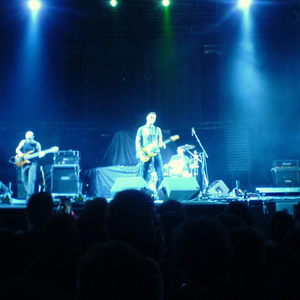 There are at least 3 bands with the name of Adastra: 1. Adastra is a rock band from Croatia. Their music can be described as a mixture of rock and electronic music with lots of influences from grunge, metal and alternative rock. Members are: Jeronim Marić (lead vocal), Danijel Tomašić (lead guitar), Petar Makar (bass guitar) and Dalibor Denković (drums). Adastra's first album has been released in June 2007, the second in 2011 and they are currently in the writing process for the upcoming third album. 2. Adastra is a heavy metal band hailing from Finland. Band was formed in 2001 and was formerly called as Paralysion. Adastra is currently signed to Finnish metal music label Violent Journey Records. Band line-up is Ville Siikamäki - vocals, Olli Anttila - guitars, Jussi Ruokolainen - drums, Santeri Vauramo - bass, Jari Hartman - guitars. So far, band has released 3 demos (2004-2006) and 4 albums (2007-2015)... http://www.adastracave.net 3. Adastra (UK) was a melodic shred metal band from Scotland formed in 2007. They have since changed their name and style. Read more on Last.fm. User-contributed text is available under the Creative Commons By-SA License; additional terms may apply.