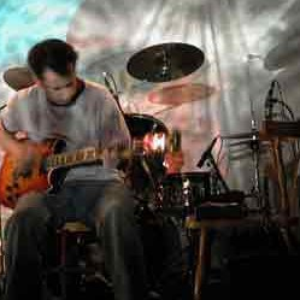 Toronto's MD Matheson has been making ambient/electronic/post-rock instrumental guitar music under the name Beef Terminal since 1995. Starting with low key indie releases (1995's cassette only release "Old Mill/Claire") and eventually signing with Toronto's renowned home of all "beautiful music", Noise Factory Records (first home of Broken Social Scene, BSS splinter band KC Accidental, NAW, Sparrow Orange, Robin Judge and Tinkertoy) in 2000, Beef Terminal released the influential ambient/electronic guitar based album "20 GOTO 10". The album was a perfect introduction to the looping guitar sounds and galloping beats that have now become Beef Terminal's trademark. The album made waves on campus radio in Canada, as well as selling well in Germany, Spain, France and Japan. 2002 saw the followup to "20 GOTO 10" when "The Grey Knowledge" was released in July of that year. Continuing on the feel of "20 GOTO 10" yet with more sophistication, Beef Terminal marked this release by playing the first ever live shows to support the project. Using programmed beats and live and looping guitar, the music quickly enthralled those who saw it performed, both confounding and exciting them that all this music was being played live by one person. In late 2003 Noise Factory released "The Isolationist", and it marked a newer more mature direction, which was greeted ecstatically by music fans on both sides of the Atlantic. Sales in Canada, the United States, Germany, France, Spain and Japan hit new highs, and the album became a staple of Canadian Campus Radio for 2004, eventually earning the #32 spot of 2004 as one of the most played records of the year. Late in 2004 a b-side and unreleased material limited edition album "Crosscheck and Departure" was released on smaller Hamilton indie label Worthy Records. 2005 saw the release of Anger Do Not Enter on Noise Factory, shortly after which it was announced that there would be no more new Beef Terminal material. New releases will be under The Sales Department name, a more ambient/experimental project which focuses less on guitar and more on beats and ambient sounds. However in 2007 an online release entitled "Life Without Nostalgia" was released, featuring previously unheard material, and there are plans for a live release in 2008. Read more on Last.fm. User-contributed text is available under the Creative Commons By-SA License; additional terms may apply.