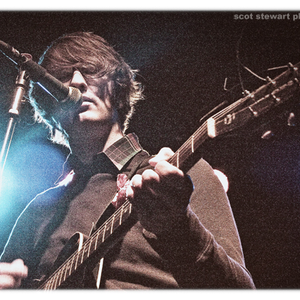 Cast Spells, the newest project from Dave Davison (Maps & Atlases, Hey!Tonal), is a raw exercise in sonic verisimilitude. The avant-pop delivery of Cast Spells’ debut EP, Bright Works and Baton points to the influence of artists such as Brian Eno, Bill Callahan and Cat Stevens but breathes quickly into the lungs of a new lyrical body. Driven by sonic experimentation, Davison and producer Jason Cupp charged the recording process with an ambitious immediacy. Twenty-eight songs in seven days with one microphone were born out of their electric symbiosis in the basement of Davison’s childhood home. Six of these songs lent themselves to a collection and twenty-two others will interlock for future releases. Pounding the notes of any instruments within reach, Davison and Cupp performed nearly the entire album themselves, often using the first take. Infused by the talents of fellow musicians, tracks such as “American Quilt” and “Glamorous Glowing” vibrate with the poetic intonation of Charles Simic and the brazen intensity of David Byrne. The brassy tone and melancholy falsetto of Davison’s vocals layer seamlessly with rhythmic swells and moving instrumentation to create warmly minimalist sonic variations throughout the album. Bright Works and Baton deserves to be sipped slowly at high volumes as it crashes into orchestrated circles in the sand. http://www.myspace.com/castspells Read more on Last.fm. User-contributed text is available under the Creative Commons By-SA License; additional terms may apply.