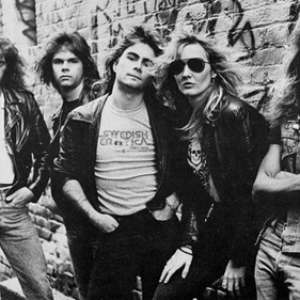 https://www.facebook.com/officialdetente . Détente was a thrash metal band founded in 1984 in Los Angeles, California (USA) with political / social lyrics. The group's original line-up included Dawn Crosby on vocals, Steve Hochheiser on bass, Dennis Butler on drums and Ross Robinson and Caleb Quinn on guitars. Détente's first album, Recognize No Authority, was released on Metal Blade Records in 1986. Within days of the debut album's release, the supporting tour had to be cancelled when drummer and co-founder Dennis was severely burned in an industrial accident, resulting in more than three months of hospitalization. Singer Dawn Crosby went on to form Fear of God, who were eventually signed to Warner Bros. Records. Ross Robinson later became a producer whose credits include Korn, Sepultura, Limp Bizkit, and many other top acts. Dawn Crosby died in 1996 of liver failure associated with a history of alcohol and drug abuse. In 1987 Detente reformed under the name of Catalepsy with vocalist Veronica Ross from Canada. With Veronica writing the lyrics and vocal melodies for the songs "Evil Within", "An Offering", "Obituary Fear", "Law and Disorder" "Who Can You Trust" and "Under the Influence". The demos, recorded at Baby O' Studios in Hollywood, California, climbed to the number one spot on the WVVX-FM Underground Radio. The band was set to release a new album titled Beyond the Threshold under a resigning of Metal Blade Records, however, the band members each went in new directions before the album was released. In 2007 Recognize No Authority was re-released on Metal Blade Records. The group reunited in 2008 for a series of appearances with singer Ann Boleyn of Hellion filling in for Crosby. In July, they performed at the Headbanger's Open Air Festival in Germany.[4] Critics were initially hesitant to lend credence to Boleyn as the replacement for Dawn Crosby.[citation needed] However, surprisingly the reviews from the festivals were very good. As of November, 2009, Ann Boleyn was replaced with Tiina Teal. A new album (featuring Tiina Teal), Decline was recorded, and released in June 2010; however, the band broke up that year. The Gauntlet listed Detente as part of their Top 10 Female Fronted Metal bands in 2011. The band was the subject of criticism in 2012, when the song "Kill Rush", from Decline, was posted onto the band's Facebook page in response to Rush Limbaugh's comments regarding Sandra Fluke. https://en.wikipedia.org/wiki/D%C3%A9tente_%28band%29 http://www.last.fm/music/D%C3%A9tente http://www.discogs.com/artist/974329-D%C3%A9tente http://www.detenterna.com/ https://www.facebook.com/officialdetente Read more on Last.fm. User-contributed text is available under the Creative Commons By-SA License; additional terms may apply.