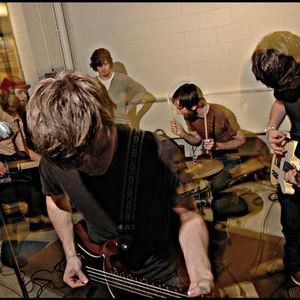 Daniel Striped Tiger are a punk band from Boston, Massachusetts. Formed in October 2003, DST started with the motivation of participating in a DIY punk scene that its members grew up in. DST is influenced by much of the early '90s emo/post-hardcore scene (Dischord, Gravity), as well as bands such as Orchid, Wolves, 400 Years, etc. After a handful of shows and time spent writing, the band headed to Dead Air Studios in Amherst, MA to record a 10 song, self-released demo. This release of harsh noisy punk was handmade and distributed. Later in 2004, the first 7", "The Desert Bird" was recorded. This was released by Dan Madden, who subsequently joined the band on drums shortly thereafter. These four songs focused more on rhythm and dynamics than the previous demo. After the recording of "The Desert Bird", the band ventured on their first East Coast tour with La Mi Vida Violenta, a six-person noise/dance/jazz explosion. With the onset of Dan on drums, the band began writing material for their first full-length album, "Condition". This time period marked one of progress and evolution for the band, and much of their songs took on new directions in structure and sound. As with their past releases, the band returned to Dead Air Studios and spent a significant time working with Will Killingsworth. Recording had become an organic experience for DST, where many songs were either completed or transformed in the studio. Horns, extra percussion, and other auxiliary instrumentation was used throughout the album. This, along with angular guitar riffs and stop-start time changes earmarked the album as being more jazzy or noise induced than previous efforts. "Condition" was released in 2005 on CD/LP by Alone Records. The release of "Condition" set the band out on a tour with Bravo Fucking Bravo, who had also recently released their album "II" on Alone Records. In the next year, DST released two songs on a split 7" with They And The Children, whom they also toured with. The songs on this split featured Rory Hall on saxophone, who would also perform with DST live at various shows. During this time, two films featuring DST were also created. The first was a documentary about the North Shore DIY scene, titled "If You Want, You Can". The second was a collaboration with friends in a Harvard film class. This project resulted in a short film showcasing the performances and happenings of DST as friends, and as a band. In the first month of 2007, an evening of live performance was documented and released on a 4-way split 11". "Live at Dead Air" consisted of songs performed for an in-studio audience of friends by DST, Ampere, Death To Tyrants, and Wasteland. This record was released by Clean Plate and limited to 330 copies. The bands 2007 full-length, "Capital Cities" featured a more refined-sound and streamlined song structures. Elements of heavy-punk, indie rock, and layered soundscapes were present. This was released by Clean Plate. In support of the album, DST did a full US tour playing a string of shows in the south with Ampere and Daïtro. Eric Gagne, of Death To Tyrants, who had also previously played live sax at times filled in on guitar for a string of this tour. In 2008, DST recorded two new songs for a split 7" with Sinaloa. This record was in support of a European tour, and was a split-release by Clean Plate (US) and Narshardaa (EU). DST is currently writing new material to be released on various splits in 2009. Discography: Daniel Striped Tiger CDEP (2004) The Desert Bird 7" EP (2004) Baking In The Sun Tour Cassette (2005) Condition LP (2005) They And The Children/Daniel Striped Tiger split 7" (2006) Live At Dead Air Split 11" (w/ Ampere, Wasteland, Death To Tyrants) (2006) Capital Cities LP(2007) Daniel Striped Tiger/Sinaloa split 7" (2008) Read more on Last.fm. User-contributed text is available under the Creative Commons By-SA License; additional terms may apply.