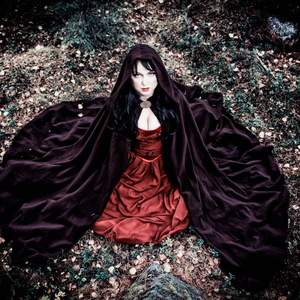 Heidi Parviainen is a Finnish classical singer singing in a lyrical soprano range. She follows professional singing studies at the Conservatory of Helsinki, Finland. She started her musical carreer in 1997 in a metal band called Iconofear as a keyboardist and a backing vocalist but in 2006 she started to look for a band as a singer. Shortly after that she joined a Finnish metal band called Amberian Dawn. They released four studio albums and did three European tours and several And several European festivals before They parted ways in 2012. A few days after releasing the news about parting ways with Amberian Dawn she announced her new solo project called Dark Sarah. Dark Sarah is making one of Heidi´s dreams come true, a dream that had been sleeping for many years but now has finally awoken. At the moment Dark Sarah is making its first studio album. The musical style will combine elements of film music and metal music. Heidi has announced several guest musicians like Manuela Kraller (Xandria), Inga Scharf (Van Canto), Kasperi Heikkinen (U.D.O, Merging Flare), Jukka Koskinen (Wintersun, Amberian Dawn) and Heikki Saari (Naildown, Tuoni) to feature on her first album. She has already released the first song and a music video called ”Save me”. Song is written by Emy Frost. Heidi:” This is a dream come true to me and the sky is the only limit for what I can do from now on, I will use the whole range of my creativity. I´m going to search for my boundaries, both musically and mentally. I´m also going to include my instrument, the piano, to Dark Sarah´s music, it has been accumulating dust for too long and I believe it is time for it too. The birth of Dark Sarah came along with the first lyrics I wrote for this new project. The idea suddenly struck me with with the force of lightning and everything became really clear. I started to write a story about Dark Sarah herself, and the idea of the split personality of Sarah represents the battle of light and dark in her mind and I will try to bring that set-up to music too. So far I have been an interpreter for other peoples´s music as I like the variety that comes along with the possibility to choose interesting songs that tickle my lyrical imagination best. But his time I´m also going to do some co-writing.” Heidi:” I have been really fortunate since I have found the best partners to work with. I needed a lot of support and guidance to start everything from scratch by myself. The first thing I did, after deciding to start working on a solo project, early 2012, was to call Mikko P.Mustonen (Pathos Music, Finland). I had always admired his master work in making digital orchestrations. We started to build up the project musically quite shortly after that. I want to thank him for his dedication, hard work, knowledge and artistic point of view. You are a gift Mikko! I also contacted the wonderful Markus Nieminen of Routafilmi, Finland to make a music video to the song ”Save me”. The song itself is really film-esque and I thought it was a perfect song for a video. I´ve always dreamed of creating a musical package where everything is really designed to support each other and here we had the opportunity. I opened up the story behind the lyrics to Markus and he filled it with his vision perfectly. So far, this has been a great, great adventure already! The music video itself was filmed in early November in Ylöjärvi, Finland just before the first snow. We had a professional, hard working film and prop team. Thank you Markus and Voionmaan opisto!” And this is where the story of Dark Sarah begins! Read more on Last.fm. User-contributed text is available under the Creative Commons By-SA License; additional terms may apply.