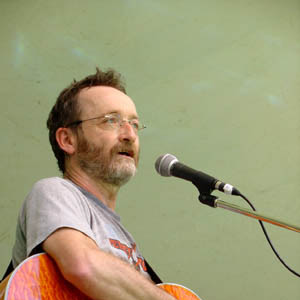 David Francey is a Scottish-born Canadian folk singer-songwriter. Born on 17 November 1954 in Ayrshire, Scotland, Francey immigrated to Canada with his family at age 12. After spending much of his life doing labour such as carpentry, he began a career in folk music in 1999, quickly making a name for himself on the folk festival circuit where he continues to perform. Since leaving construction and recording Torn Screen Door in 1999, Francey has established himself as one of today’s finest singer-songwriters. Francey has released 9 CDs to date. His most recent is "Late Edition" - His 2011 album released in April. Francey’s CD, Right of Passage, earned him his third JUNO (Canada’s top music award) in less than five years. Francey also had the honour of receiving the prestigious SOCAN Folk Music Award. "David’s straightforward songs tell honest stories of real people and real places. Poetic perception and a keen eye for the heart of the matter are trademarks of the man and his music. His songs and stories are a direct connection for audiences seeking depth and meaning in the day-to-day." Shelter Valley Folk Festival "I discovered this guy on the Red House label and really liked his style. He reminds a bit of Richard Thompson, but has a great soul in his voice. He has some great lines as well..."I keep watch with a weather eye". Take a listen, it wont disappoint." Read more on Last.fm. User-contributed text is available under the Creative Commons By-SA License; additional terms may apply.