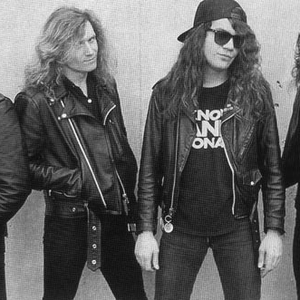 There is more than one artist named Dirty Looks 1. 80s / Present Hard Rock/Metal Band 2. A late 70s/early 80s new wave/power pop trio from Staten Island 3. A punk pop band from New York with ex-members of Bent Outta Shape 1) From the ashes of Erie, Pennsylvania cover-band Crossfire, Danish-born vocalist/guitarist Henrik Ostergaard and fellow Crossfire band-mate and bassist Jimmy Chartley traveled to San Francisco to form Dirty Looks in 1984. Fellow Crossfire bandmate Boyd Baker would join them a year later. While in California and upon their return home to PA, the group had a revolving door membership, yet managed to release an EP and three independent (and hard to find) albums before Atlantic records came calling. For their major label debut Dirty Looks consisted of Paul Lidel (guitar), former Harpo-bassist Jack Pyers (bass) and Gene Barnett (drums). The resulting album, Cool From The Wire, found its way onto the Billboard charts while getting substantial air-time on MTV for the video 'Oh Ruby' For the follow-up album, there were conflicts with original producer Beau Hill and the original recordings for Turn Of The Screw were scrapped, but the re-worked album would be the group's most successful release reaching even higher on the Billboard charts. The album of outtakes, Bootlegs was released in 1991, then the group broke up in 1993 following the release of Five Easy Pieces with Ostergaard forming Rumbledog, Lidel hooking up with Dangerous Toys (and later Broken Teeth and Adrenaline Factor, his current project) and bassist Brian Perry resurfacing in Jake E. Lee's Wicked Alliance, and most notable the 2002 resurrection of Industrial Thrash legends Prong. Ostergaard began recording under the Dirty Looks moniker again in 1994 to record Chewing On The Bit album. Then he worked with Rumbledog again, releasing an album in 1995 with bassist Jassen Wilber, drummer Ron Sutton, guitarist Mike Ondrusek and guitarist Mike Smith. Ostergaard put out two releases as Dirty Looks in 1996. With the personnel above minus Ondrusek and adding singer Gabriel Scott Robison, Ostergaard took a back seat in the vocal department and formed the Burning Orange project who released an album before calling it a day in 1996. Since then, Ostergaard has been retired from the music business to focus on family life. According to their Myspace page[2], Dirty Looks have reformed and have released a new album, "Gasoline" in 2007. Two more studio albums have been released since including "Superdeluxe" and "California Free Ride". Both albums were released in 2008. At the end of 2009 Dirty Looks signed with Nashville, Tennessee label FNA Records. In 2010 they re-released three albums. Discography Dirty Looks EP (1984) Dirty Looks (1984) In Your Face (1986) I Want More (1987) Cool From The Wire (1988) Turn Of The Screw (1989) Bootlegs (1991) Five Easy Pieces (1992) Chewing On The Bit (1994) One Bad Leg (1994) Rip It Out! (1996) Slave To The Machine (1996) Gasoline (2007) Superdeluxe (2008) California Free Ride (2008) Slave To The Machine re-issue remastered (2009) The Worst Of Dirty Looks (2009) Dirty Looks + EP re-issue remastered (2010) In Your Face re-issue remastered(2010) I Want More re-issue remastered (2010) I.C.U. (2010) 2) Dirty Looks were formed in the late '70s in Staten Island, NY. Composed of Patrick Barnes (guitar/vocals), Peter Parker (drums/vocals), and Marco Sin (bass/vocals), the trio began playing their hard-rocking power pop at Max's Kansas City and CBGB where they were discovered by Stiff Records' Dave Robinson. Robinson signed them, anticipating they were "the next big thing." After releasing one brilliant single ("Let Go"), a good but unfortunately overlooked debut LP for Stiff, and a mediocre follow-up, the band faded into obscurity. 3) Dirty Looks were a punk pop band from New York with ex members from Bent Outta Shape. They put out a split with Bossy - also containing ex-members from Bent Outta Shape - on Salinas Records and a 7" ep on Iron Pier. Read more on Last.fm. User-contributed text is available under the Creative Commons By-SA License; additional terms may apply.