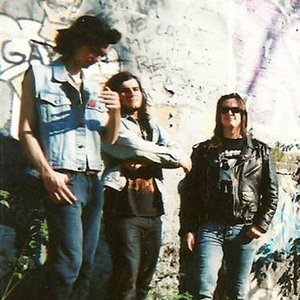 There are at least two artists under this name: 1) Droid is a five-membered groove metal band from Long Beach California. 2) Droid is an organic jazz-influenced drum & bass band. 3) Droid is a Progressive Thrash/Speed Metal band from Brampton/Mississauga, Ontario. 1) Droid are an American groove metal/thrash metal band with hardcore and death metal influences from Long Beach, California. They are currently signed to Korn member James "Munky" Shaffer's record label Emotional Syphon Records. The band was signed to the record label after Shaffer watched them perform live at the world renowned Whiskey-A-Go-Go. The band would also accompany Korn and Limp Bizkit on their 2003 Back 2 Basic's tour, as well as the 2006 and 2007 installments of the Family Values Tour. Droid have also worked as the backing musician's for Korn bassist Fieldy's side project Fieldy's Dreams. The band has been voted 2007 newcomer of the year at The Gauntlet, and the music video for "Fueled By Hate" was voted the #11 video of 2007 on MTV2's Headbangers Ball. It has been recently announced by the band that Duke has left DROID. They are currently auditioning new bassists. Current line-up: James Eason - vocals Jamie Teissere - guitar Bruce Childress - guitar Nick McWells - drums Ex-Members: Duke - Bass 2) Droid is an organic jazz-influenced drum & bass band signed to Shadow Records. All of the group's music is performed live on instruments (drums, bass, synthesizer, trumpet), with no use of loops or samples. Their album "NYC D'n'B" was released in 2000. Read more on Last.fm. User-contributed text is available under the Creative Commons By-SA License; additional terms may apply.