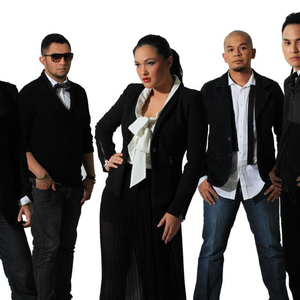 Écoutez! is a music group from Indonesia headquartered in Tebet, South Jakarta - Indonesia. The group formed in 2005, and the members are Delia (vocals), Jay (Drums), Ayi (Guitar), Leo (Bass), and Iyas (Keyboard). Short History In 2005 after Tompi, Bibus and Amar decided to leave the ASA (Soul Art and Attitude) - Tompi went solo, Amar joined Maliq & D'Essentials, Bibus joined The Groovology - The three remaining members, Ayi, Jay and Leo decided to continue with this band. They held auditions where they found Delia and Iyas. Then on November 1, 2005, Écoutez! formed and produced by Levi (the Fly). Ekute On June 15, 2006, Écoutez! released their debut album, which means the language that is Ekute pronunciation of the name for their band. Their first single is "Simpan Saja" which was soon followed by their second single, "Percayalah" and their third, "Tunjuk Satu Bintang". POSITIVe In December 2008, Écoutez! released their second album titled "POSITIVe" with a single "Are You Really the One". Read more on Last.fm. User-contributed text is available under the Creative Commons By-SA License; additional terms may apply.