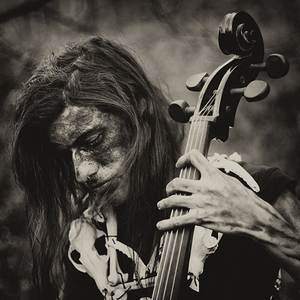 1) Ellende is a two-member black metal band from Graz, Styria. Austria. The band consists of Lukas Gosch (also in Aphotic Excess) who does vocals and is also the main instrumentalist, and Anne who mainly contributes violin and viola. They have released an EP on Bandcamp named "Rückzug in die Innerlichkeit" in 2012 and a selftitled full-length via Talheim Records in 2013. A follow up EP called Weltennacht was released in 2014. According to the band's official website, ellende is derived from a Middle High German word meaning "unclaimed wilderness", "misery" and describing the uneasy feeling of uncertainty of the emptiness and distance within onself. This Middle High German expression "ellende" can also mean "foreign country", "exil" or "solitude." http://www.ellende.at https://www.facebook.com/ellende.official http://ellende.bandcamp.com/ 2) A lot has been said about Ellende: that they are a collection of people from around the world who communicate with each other and exchange music. A Belgian in Tokyo, a South African in London, an American in Paris. But who really knows? It seems that Ellende's studio, The Plantation, in Capetown had incredible equipment: ARP, Moogs, Korgs, Yamahas, Oberheims. And terabytes of sounds, sent over the years by hundreds of collaborators from around the world. Ellende.net is currently off-site, as someone, (one of the collaborators?) burned The Plantation down. Everything gone, save some of the earlier releases now made available for free to download. Is the end of The Plantation the end of Ellende? Will the misery continue? Is the end near? Who knows, and who cares? Wim Bontjes the deceased chief creative officer of Ellende once wrote: "Can you plan your life, day after day, in such great detail, that after 10 years one might say: enough is enough, and as the National Planning Bureau knows: the plans are always the best, so good in fact that you can forget about the implementation. No need to feel dissapointed later on, as we have dreamed about it now and here." Read more on Last.fm. User-contributed text is available under the Creative Commons By-SA License; additional terms may apply.