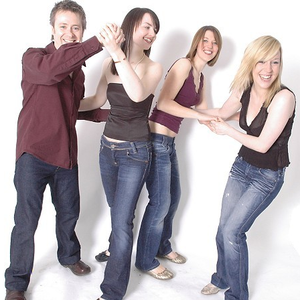 Filska is a high energy, traditional band from the Shetland Islands. Their music is built around traditional fiddle tunes. 'Filska' means 'high spirited' in the local language of the Shetland Islands. Band members include: Jenna Reid; fiddle, vocals & accordion, Bethany Reid; fiddle, vocals & piano, Gemma Wilson; fiddle & vocals and Andrew Tulloch; guitar & vocals. Jenna, Bethany and Gemma grew up on the Shetland Islands, and began playing together at local events an early age. They were frequent prizewinners in the Young Fiddler of the Year Competition, an annual event in the islands. They released their first album, 'Harvest Home' in 1995, and performed on the Scottish television series, 'Ceol na fidhle' recorded live in Coo Cathedral, Aberdeenshire, Scottland. They made their second album, 'Time and Tide' in 1998. This album was recorded by Shetland guitarist/singer, and recording engineer Andrew Tulloch. He became a member of Filska after they finished their second album. Their new release ' Thousand Miles Away' includes several of their own compositions. They have performed in Norway, Sweden, Denmark, Italy, France, Germany, Canada, and the United States where they represented Scotland at the Millennium Celebrations held in Disney's Epcot Centre, Florida. Read more on Last.fm. User-contributed text is available under the Creative Commons By-SA License; additional terms may apply.