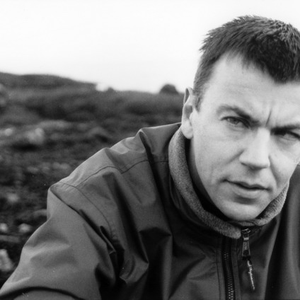 Biosphere is the main recording name of Geir Jenssen (born 1962 in Tromsø, Norway), a musician who has released a notable catalogue of ambient electronic music. He is well known for his "ambient techno" then "arctic ambient" styles, his use of music loops, and peculiar samples from sci-fi sources. His track "Novelty Waves" was used for the 1995 campaign of Levi's. His 1997 album Substrata is generally seen as one of the all time classic ambient albums. (1962-1991) Prior to Biosphere Jenssen was born in 1962 in Tromsø, a city within the Arctic Circle in the northernmost portion of Norway. He would later become famous for his "arctic sound". In 1983, he composed his first piece of music. In 1985, Jenssen was part of the newly-created Norwegian moody synth trio Bel Canto. They released their first two albums together. In 1989, he left the band in order to pursue a different music style altogether. Throughout the late 1980s, Jenssen used the moniker Bleep, under which he produced various 12" records. His early influences were from Acid House and New Beat music. Released In 1990, The North Pole By Submarine was his first solo album. This album would, however, also mark the end of both the Bleep moniker and a distinct change in artistic direction. (1991-Present) as Biosphere Following the release of The North Pole By Submarine, Jenssen chose a new musical direction and began releasing his music as Biosphere on obscure Norwegian compilation albums, marking a major stylistic change as well as avoiding any association with "bleep house" (as made popular in the early 1990's by the Sheffield UK-based Warp Records). Released in 1991, Microgravity was the first full-length Biosphere album, released on the small Norwegian label Origo Sound. Previously, Jenssen had failed to get his new album released to a wider listening base by the Belgian record label SSR (a sublabel of the renowned Crammed Discs label), who weren't sure what to make of the arctic influenced and obscure sci-fi and cult-movie sample driven ambient house that made up most of the album. Eventually, Jenssen did manage to get the album released on the R&S Records subsidiary Apollo in 1992, to much critical acclaim. In 1994, the second Biosphere album, Patashnik, was released. Through Patashnik, Jenssen continued to explore his ambient-house styings to an even greater extent. Patashnik contained the first hints of the reduction in beat-driven song structure that would mark later Biosphere releases. Unlike the first album, Patashnik was quickly picked up by a comparatively large international audience, which brought Biosphere greater recognition. In 1995, Levi Strauss & Co. was searching for a new angle to add to their television advertisement campaign (which up to that point had never featured electronic music), and they decided to use the uptempo track "Novelty Waves" from Patashnik. Shortly thereafter, "Novelty Waves" was released as a single (featuring remixes by various other artists), and managed to chart in several countries. Although Jenssen never regretted his approval for use of the track, he also never sought this kind of fame and subsequently turned down various requests by his record company and peers to collaborate with well-known Techno and Drum 'n Bass artists or to create a follow-up album in the same style. During that same year, Biosphere contributed the song "The Seal and the Hydrophone" exclusively to Apollo 2 - The Divine Compilation released by Apollo Records. Released in 1997, Substrata is a purely atmospheric ambient Biosphere album, released on All Saints Records. Substrata, which marked Jenssen's embarkation towards an intensely minimal style, is not only often considered to be Jenssen's best work to date, but is also seen as one of the all time classic ambient albums.[1]. In 2000, Biosphere released Cirque on his new home Touch Records, an ambient album driven by muffled beats, samples, and minimal atmospherics. Though Cirque briefly revisted territory covered by earlier Biosphere releases, the rhythm section throughout the album remains an element of the background, unlike Jenssen's first two Biosphere releases, wherein the drums occupied a dominating proportion of the foreground. In 2002, Shenzhou was released. Shenzhou, Jenssen's fifth full length album under the name Biosphere, was a more abstract work, comparable to Aphex Twin's 1994 album Selected Ambient Works Volume II. The material on the album draws from elongated, pitch-shifted loops taken from Debussy's La Mer (The Sea). Released in 2004, Autour de la Lune stands as the most minimal and austere Biosphere album to date. The drones employed on this album are comparable to Coil's 1998 album Time Machines in their timbre and slow rate of change. The bulk of this work was originally commissioned and broadcast in September 2003 by Radio France Culture for a musical evocation of Jules Verne. Most recently, in 2006, Jenssen released Dropsonde, a half beatless, half rhythmic album comprised of jazz rhythms evocative of Miles Davis' 1970s jazz fusion works. A partial vinyl sampler was released a few months earlier in 2005. Live Biosphere regularly performs live during electronic music festivals and in clubs throughout Europe and various other locales around the world. Live performances usually consist of Jenssen performing improvisations or variations on newer tracks on a laptop while video art is projected behind him; for example, full-screen video art was projected in his Picturehouse cinema tour in April 2006. Although these performances are rarely tied specifically to a recent album release, the uptempo material from the Bleep and Microgravity/Patashnik era is rarely featured in Biosphere performances. In May of 2004, Biosphere's first United States performance took place in Detroit. Read more on Last.fm. User-contributed text is available under the Creative Commons By-SA License; additional terms may apply.