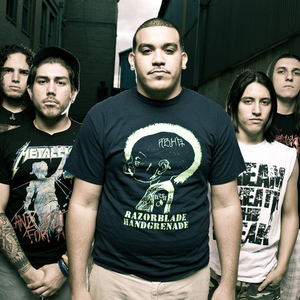 Grimus is the name of at least three different artists: 1. A Romanian alternative rock band from Cluj-Napoca. 2. An American melodic deathcore band from Elizabeth New Jersey. 3. An Australian artist named Pierre Proske. 1. The alternative rock band from Cluj-Napoca, Romania. Grimus is the (approximate) anagram of the word "simurgh" (a gigantic bird in Persian mythology). It is also the first novel of the Indian-born writer Salman Rushdie who created this anagram himself. The abstruse and tyrannical character of the novel inspired the name of the band. Line-up: Bogdan Mezofi (vocals), Cristi Csapo (guitar), Vali Răuca (guitar), Lehel Kiss (keyboard), Titus Vădan (bass) and Tamas Adorjani (drums). While students in different universities in Cluj-Napoca, Grimus started out as a 5 piece rock band under the name of Revers. They quickly changed name and expanded their sound with keyboards. Grimus then underwent frequent band member changes; at the time the band also recorded a 3 song demo, which was played by various radios around Europe, notably Solitude which was declared Song of the Year 2006 by CityFM. The band enlarged its perspectives by entering under the auspices of Underdog, building a solid fanbase in Romania. In 2007 the band was invited at all major festivals in Romania and played regularly in various pubs. In 2007 Grimus also won the National Final of the Global Battle of the Bands and represented Romania in the World Final in December that year. In 2008 Grimus released its first full-length album - Panikon. See more on: www.grimus.ro and www.myspace.com/grimusworld. 2. The American melodic deathcore band from Elizabeth New Jersey. Hailing from an urban corner in North-eastern New Jersey, Grimus has been hitting the jersey metal/hardcore scene since 2007. The band has gone through a couple line-up changes since their debut in late 2007 leaving the last three original members (Bryan Martinez, Mike Muñoz and Marco Bobadilla) to keep pushing the band forward. In early 2008 the band found itself in need of a new drummer and because of this went on a short hiatus. 2008 brought the addition of drummer Jon Scott (former So I Shot Myself) to the line up bringing Grimus back full force again. Few weeks later however the band suffered another loss and found themselves in need of a bassist. They went on to recruit Michael Gonçalves (guitarist for fellow jersey metal band Skies Devoured) to take on bass duties. With a full line-up again, Grimus was back after a 5 month absence to take over the music scene once again. The band has recently finished recording their debut EP entitled The Progress In Elimination. The 6-song EP was recorded in Clifton, New Jersey by Bobby Torres in Frightbox Studios, a studio for great Jersey bands such as Abacinate, One Brick Down and The Grieving Process. The EP was mastered by the great Alan Douches who has worked on records for national acts such as Mastodon, The Black Dahlia Murder, Cannibal Corpse, Unearth and countless more. The Progress In Elimination was released March 28, 2009 and is availablefor purchase at select music stores in New Jersey and through the band at any shows. For more click here www.myspace.com/jerseygrimus 3. See more on www.digitalstar.net/grimus. Read more on Last.fm. User-contributed text is available under the Creative Commons By-SA License; additional terms may apply.