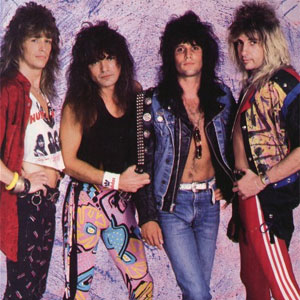 There are 4 artists that are called Hurricane. 1) a hair metal band formed in the mid-80's featuring Robert Sarzo (guitar), Tony Cavazo (bass), Kelly Hansen (vocals), and Jay Schellen (drums). Quiet Riot's Kevin Dubrow introduced Robert Sarzo and Tony Cavazo (brothers of Quiet Riot members Rudy Sarzo and Carlos Cavazo) in the early 80s. After deciding to form a band, Sarzo and Cavazo recruited singer Kelly Hansen and drummer Jay Schellen. With little label interest, the band decided to release a mini-album themselves, Take What You Want. The album and constant touring led to them getting a major label deal. Hurricane had four albums. Take What You Want (1985), Over The Edge (1988), Slave To The Thrill (1990), and Liquifury (2001). Over The Edge was their most successful album featuring their only top 40 hit, "I'm On To You." In 1989 Sarzo left the group and was replaced by ex Lion guitarist, Doug Aldrich. This lineup recorded one album before Aldrich moved on to House Of Lords and the rest of the group quickly disintegrated with the onslaught of grunge. Schellen recorded with both Unruly Child and Sircle Of Silence while Hansen did a considerable amount of session work. Schellen suggested that Hansen help with the recording of Unruly Child's second release, and shortly after they agreed to resurrect Hurricane. Sean Manning (guitar), Carlos Villalobos (guitar) and Larry Antonino (bass) rounded out the new version of the band, and they released Liquifury. Hansen now sings in the band Foreigner . 2) From 1986 to 1997, DJ Hurricane was the natural fixture behind the turntables at Beastie Boys concerts. The 1997 Tibetan Freedom Concert II was the last official appearance of the Hurra as DJ for the Beastie Boys. He would later return as a guest DJ on stage in Atlanta, GA when the Hello Nasty tour passed through in 1998. Hurricane started off as part of Run DMC's entourage in the mid 1980's. hen the Beastie Boys and Run DMC went on the Raising Hell Tour (1986), Hurricane stepped up and filled the role as DJ when Dr. Dre (of Yo MTV Raps fame) became frustrated with life on the road (i.e. having been left behind in a Florida hotel lobby). Around the same time that Licensed to Ill was being recorded, Hurricane went into the studio with Davy D and recorded the "Davy's Ride" LP. Davy D would later be an opening act for the Beastie Boys during parts of the 1987 tour. In 1990, Hurricane teamed up with some old friends to put out the Afros Kickin' Afrolistics LP. The Afros generated a fair amount of buzz for themselves and even made an appearance on Howard Stern's WWOR New York cable talk show to promote the album. However with the birth of Grand Royal Records in the early 1990s, DJ Hurricane began working on what would become his first solo effort entitled The Hurra.During 1994 and 1995 Beastie Boys concert performances, DJ Hurricane would step out from the turn tables and perform two to three vocalized songs. Usually he would rap original lyrics to the Beastie Boys' instrumental "POW", as well as run through either "Elbow Room" or "Four Fly Guys". The Hurra which was later released in 1995, might as well have been a companion piece to Ill Communication as the two albums sound somewhat similiar due to that fact that "the Hurra" features guests along the lines of Mario Caldato, Money Mark Nishita, Eric Bobo, and yes, the Beastie Boys. In 1997, DJ Hurricane released another full length album Severe Damage in Japan. Unlike the Hurra, this release did not have close ties to the Beastie Boys. The closet thing to a Beastie Boys guest appearance on this album was Adam Horovitz's production work on the track "Japanese Eyes." Three years later Hurricane put out his strongest album Don't Sleep which featured a legion of guest stars. Back again on this one were vocals from Adam Horovitz and keyboard work by Money Mark. Most recently DJ Hurricane has lent his name to a new computer gaming company called 404 Gaming. In fact, the 404 Gaming website states that Hurricane is one of the company's co-founders. It appears as though Adam Horovitz is also involved to a lesser degree. With the success of Def Jam's "Fight For NY" game, it will be interesting to see what comes of this new project. 3) HURRICANE is a 4 piece hardcore/punk/metal oufit from Tampin , Malaysia. This band was formed in the early of 2011 from the ashes of Devilica and Kinsfolk with Malik on Drum, Razly ( ateng) as vocal , Razak on guitar and Ijam on bass. In the middle of 2011, after their first show in Tampin, the band replaced Ijam with Aizat from Channeling Mahatma. The band recorded their 1st demo contained 2 songs in the end of 2011 at Seventh Heaven Studio and released it in 2012. On March 8th 2012, the band got a chances to open for 1 of their biggest influenced, The Dillinger Escape Plan live in Kuala Lumpur. After playing a few shows the band already recorded 10 songs at Green House Studio between August to November 2012 and plan to release it on April 2013. Musically the band are influenced by lots of chaotic, mathcore, screamo ,neo crust and 90’s hardcore sound Discography: *In Venin (2013) 4) a Japanese hardcore punk band. Known releases are: 2 demos Barmy Army CD-R 4 songs on the Terro Rhythm #5 comp. Read more on Last.fm. User-contributed text is available under the Creative Commons By-SA License; additional terms may apply.