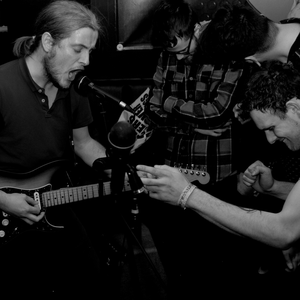 Kaddish are a screamo band from Dundee, a city on the North East coast of Scotland. United Kingdom Collectively, they are Chris, Mark, John and Dom. Kaddish have been a band for a very long time. It is in the past few years, however, that they have been at their most active, releasing a seven song demo, a split 7” with Battle of Wolf 359 (2008), and, most recently, a ten song LP (2010). Kaddish released their LP with the support of four UK based labels: Parade of Spectres, Autumn Jams, Internationale, and This One’s for the Crew. Inside the LP they include song explanations and an essay on some of the issues that motivate their thinking as a band. It is a matter of recorded fact that Kaddish intend these words as an invitation to dialogue. Infrequently, Kaddish can be found manipulating the third person in an attempt to subvert the rules of websites that alienate them from the means of direct expression. It is reputed that they understand the necessity for such rules, but that they view them as part of a wider insidious tendency to convert human relations into impersonal data transfers. Kaddish do not, however, have any problem with people freely downloading their music. Rather, they would simply like to suggest that the tendency towards impersonal data transfer be viewed as means, and not as an end. That way, direct contact is made through impersonal means, and the subversion becomes all the purer for it. If you’d like to make contact with Kaddish, they can be found at: www.myspace.com/kaddishuk Read more on Last.fm. User-contributed text is available under the Creative Commons By-SA License; additional terms may apply.