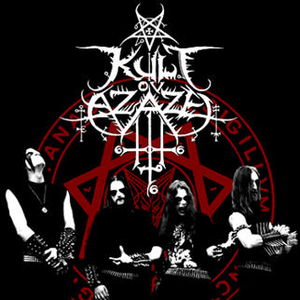 (Tracks on this page not available for listen and download because of a copyright notice.)

Inspired by blasphemous and blackened Metal, KULT OV AZAZEL spit forth their own version of hate towards humanity with relentless speed and ferocity. At the closing of an old era, KULT OV AZAZEL rises from the ashes of the weak to unleash a deadly plague of Black Metal upon the four corners of the earth...the time has come to embrace the shadows of a new Satanic aeon and KULT OV AZAZEL lead the way, torches in hand, prepared for the burning. The unholy birth cries of KULT OV AZAZEL were first heard in April of 1999, under the infernal name of AZAZEL. Hailing from South Florida, masterminds Xul and Xaphan decided to join forces, marching relentlessly towards a shared destiny with a grim vision. June of 2000, marked a turning point for the entity formerly known simply as AZAZEL. The horde decided to distance themselves from other bands using the same name, and re-anointed themselves as KULT OV AZAZEL. After the release of the MCD "Order Of The Fly", various split CD’s and compilations, which established KULT OV AZAZEL as an unstoppable force upon the US Black Metal, they signed with Arctic Music Group, ensuring them proper distribution and a good budget with which to create their debut full length. In April of 2001, the much-anticipated full length was released. "Triumph Of Fire" consisted of 11 hymns to the forces of hatred and would live up to their motto of "No Beauty, No Atmosphere, No Tranquillity." It would also prove that true Black Metal still exists, in its pure, ugly, raw form. In the year 2001, the band obtains a permanent drummer known as the Hammer and in 2002 incorporates a second guitarist, Nocturath. In an astoundingly short time, this band has evolved from a vision to an unstoppable force. KULT OV AZAZEL have come to burn the old world and conquer the new; they are the musical embodiment of pure hatred and blasphemy which has been professed with the 2003 release of "Oculus Infernum". Read more on Last.fm. User-contributed text is available under the Creative Commons By-SA License; additional terms may apply.