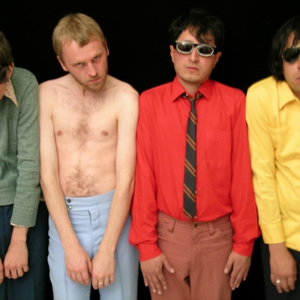 Los Fancy-Free are from Mexico City. Frontman Martin Thulin - aka Menonita Rock – was born in the State of Chihuahua, Northern Mexico in a Scandinavian Mennonite community called Nueva Escandinavia. Mennonites are like Amish People. They live isolated from the rest of the society with their own rules and traditions. They are not allowed to work regular jobs. Instead they sell the goods they produce themselves as farmers. That’s why you can find these natural blonde Mexicans selling cheese on the streets in Mexico City. His parents were Mennonite hippies, who felt that the community were a little to small for their ideas, so they moved to Sweden and took the little child Martin with them. Growing up in Sweden has been important to Martin and Los Fancy-Free's music, as punk and electro pop were at it’s peak when he was a kid. "This album has been a bit like revisiting my childhood, mixing music styles that back then were impossible to mix. You either listened to electro or punk, not both. But I did, so when I were hanging out with my punk rocking friends I had to hide away my Gary Numan, Soft Cell, Human League, Depeche Mode, Fad Gadget and Bowie records", says Martin. Martin moved back to Mexico after high school and has lived in Mexico City for about ten years now. "I think Mexico City is extremely important to what I do. People in Europe with the same influences as I would probably come up with someting more boutique, for boutique people and fashion designers or whatever. But if you live in Mexico City it's impossible not to mix in the chaos. This city is never quiet, it's hysterical, it's urban planning out of control. Cars all over. At the same time it's really provincial, which is super cool, if you skip going to the pretentious neighbourhoods like La Condesa you walk around in a city completely off-fashion with it's own things going on, that's really liberating. It's also very dificult to find new music, to be up-dated on music. Which is good and bad I guess. Basically what I listen to are the records I bought as a kid and the things I find in the trash here like Bobby Orlando, the Flirts, Trans X, Buiscuit, Lime. High Energy was huge and still is in Mexico, no revival, it's been on forever. Then all the cumbias and norteñas of course, which you really can't hear in my music. I play what for Mexicans would be world music. Actually I listen to a lot to Mexican rock from the sixties, bands like Los Hooligans, Los Rogers and Los Beatnicks etc. They probably wanted to sound like American rock'n'roll bands but turned out garage without knowing... I liked their names, always los plus something in English; for example Los Fancy-Free. Who are the Rolling Stones? Ah, Los Rolling Stones”. (http://www.bungalow.de/losfancyfree/bio) Los Fancy-Free released their electropop debut album "Menonita Rock" on Noiselab Records, Mexico, in December 2002. In 2006 "Out of place" was released, showing a change in direction approaching more to a psychedelic-garage rock sound. A double album is scheduled to come out in May 2007. Read more on Last.fm. User-contributed text is available under the Creative Commons By-SA License; additional terms may apply.