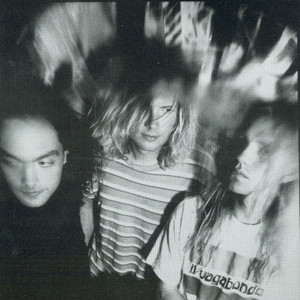 Love Battery is an American psychedelic rock/grunge band from Seattle, Washington. For the most part Love Battery was an unusual group in the early 90's Seattle music scene. Blending intense swirling psychedelic guitar work, pulsating rhythms, driving beats and heartfelt vocals derived from '60s garage/psych, '70s punk rock, '80s post punk and '90s grunge, their music was significantly more complex than most of the music associated with that era. Although they never achieved the commercial success of many of their contemporaries, they nonetheless retained a fervent cult following that continues to this day. Love Battery was formed in 1989 by former Room Nine leader Ron Nine (b. Ron Rudzitis), guitarist Kevin Whitworth (ex-Crisis Party), bassist Tommy "Bonehead" Simpson (also ex-Crisis Party) and Mudhoney drummer Dan Peters. Their name came from a song of the same name by British punk band the Buzzcocks. Before releasing their first single Peters left the group and was replaced by ex-Skin Yard drummer Jason Finn. With this lineup the band released their debut single Between The Eyes for seminal Seattle record label Sub Pop. By 1990 Simpson had been replaced by ex-U-Men bassist Jim Tillman. With this lineup the band released their debut EP Between the Eyes in 1990, again on Sub Pop. This record was later expanded and released as their first full-length album in 1991. Following the Between The Eyes EP were the Foot singles and Out Of Focus EP. In 1992 the band recorded and released what many consider their finest record Dayglo. In the Sub Pop catalog, Dayglo was listed as "Blotter not included" a play on "Batteries not included" instead referring to LSD. Soon after, Tillman left to pursue other interests. He was replaced at first by original bassist Tommy Simpson, who in turn was replaced by ex-Green River and Mother Love Bone guitarist Bruce Fairweather. In 1993 the Far Gone album appeared, which to many was considered a disappointment following Dayglo's critical success. Initially Far Gone was to be released by PolyGram Records but due to contractal problems with Sub Pop Records, Far Gone was dumped by the major label. Instead an inferior 'rough mix' of the album was released by Sub Pop, a problem which Love Battery planned to rectify by remixing and reissuing but never did. Following the Far Gone fiasco, Love Battery signed with Atlas Records in 1994 releasing the Nehru Jacket EP late in the year. It contained 2 songs that also found their way onto 1995's Straight Freak Ticket album which was also released on Atlas in 1995. The label failed to promote the band and album properly however which resulted in poor sales. Shortly thereafter Finn left the group to join The Presidents of the United States of America who quickly found success later in the year. A prolonged period of uncertainty ensued following Finn's departure with an array of drummers brought in as his replacement including original drummer Dan Peters and ex-Posies and Fastbacks drummer Mike Musburger. The band practically disappeared until the release of their fifth album Confusion Au Go Go in 1999. This time around drummers Peters, Musburger and Finn all contributed to the album although Peters took on a majority of the work. Following the release of Confusion Au Go Go Love Battery remained for the most part quiet. A few one off performances were made in 2002 featuring Tommy Simpson returning on bass and Finn and Peters on drums. After a prolonged period of inactivity the band played their first show in 4 years on June 23, 2006 at Neumoes in Seattle, WA. The current lineup consists of Nine, Whitworth, Simpson and Musburger. In 1996 Love Battery was featured in the documentary Hype!, chronicling the rise of the Seattle "grunge" music scene. A clip is shown of a live performance of "Between the Eyes", and the song also appears on the documentary's soundtrack. A video for "Out Of Focus" appears on Sub Pop Video Network Program, Volume Two. They also made videos for "Fuzz Factory" and "Harold's Pink Room" from the Straight Freak Ticket album. The "Fuzz Factory" video was shot in Las Vegas and featured the band driving around in a white Cadillac convertible, hinting at Hunter S. Thompson's famous book, Fear and Loathing in Las Vegas years before the film of the same name starring actor Johnny Depp was released. A "Fuzz Factory" is also a creation of Z.Vex Effects, a musical stomp-box fuzz pedal hand crafted with vintage style '60s parts and hand painted with a psychedelic look. Love Battery leader Ron Nine also plays in new band Down With People who have been significantly more active than Love Battery as of late. Albums * Between The Eyes (Sub Pop Records, 1991). * Dayglo (Sub Pop Records, 1992). * Far Gone (Sub Pop Records, 1993). * Straight Freak Ticket (Atlas Records, 1995). * Confusion Au Go Go (C/Z Records, 1999). Singles/Eps * "Between The Eyes" b/w "Easter" (Sub Pop Records, 1989). * "Foot" b/w "Mr. Soul" (Sub Pop Records, 1991). * Out Of Focus EP (Sub Pop Records, 1991). * Nehru Jacket EP (Atlas Records, 1994). * "Snipe Hunt" b/w "Punks Want Rights" (Let Down Records, 1996). Compilation/Soundtrack contributions * "Between The Eyes" on The Grunge Years (Sub Pop Records, 1991). * "I Just Can't Be Happy Today" on Another Damned Seattle Compilation (Dashboard Hula Girl Records, 1991). * "Ball And Chain" on Milk For Pussy (Mad Queen Records, 1994). * "No Matter What You Do" on We're All Normal And We Want Our Freedom: A Tribute To Arthur Lee and Love (Alias Records, 1994). * "White Bird" on Star Power! K-Tel Hits Of The '70s (Pravda Records, 1994). * "Fuzz Factory" on Turn It Up & Pass It On, Volume 1 (1995). * "Straight Freak Show" on huH Magazine CD6 (promo only) (RayGun Press, 1995). * "Out Of Focus (Live)" on Bite Back: Live At The Crocodile Cafe (PopLlama Records, 1996). * "Color Blind" on Home Alive: The Art of Self-Defense (Epic Records, 1996). * "Commercial Suicide" on Teriyaki Asthma, Vols. 6-10 (C/Z Records, 1999). * "Half Past You" on Sleepless In Seattle: The Birth Of Grunge (LiveWire Recordings, 2006). Read more on Last.fm. User-contributed text is available under the Creative Commons By-SA License; additional terms may apply.