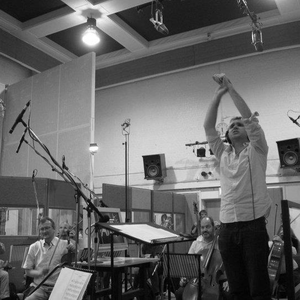 Michael Price is a composer, producer, arranger and award-winning music editor. He writes in full orchestral and electronic and contemporary idioms, and is an experienced producer, arranger and programmer, having worked on more than 30 major studio pictures. On 31 March 2014 he was interviewed at the Royal Albert Hall as part of the BAFTA Conversations with Screen Composers season. Michael’s music career began with the Tonmeister course at Surrey University, where he won the PRS composition prize in 1990. After writing a number of scores for contemporary dance, he became Musical Director of DNA Dance and Music, whose projects included the arts council funded chamber opera “All the Garden Gold”, based on the life of William Morris and the Pre-Raphaelite movement. Following work as a dancer for contemporary houses, Michael's first film work was in 1996, when he was invited by Michael Kamen to orchestrate and program electronic sounds for the Paramount film EVENT HORIZON. This led to a 5-year working relationship encompassing a number of film scores in London, LA and Prague, and concerts in Berlin, New York, San Francisco and Geneva. Following the production of the score to BAND OF BROTHERS, Michael was approached to music edit on The Fellowship of the Ring for New Line Cinema. In addition to composing for Zentropa's "Dommeren" and Slingshot Studios’ Sugarhouse he scored 2 documentaries for famous producer and director Alfonso Cuarón; The Possibility of Hope, and Naomi Klein’s The Shock Doctrine, both in 2007. Michael met Cuaron when he scored additional music for the Academy Award winning feature Children of Men, working with Cuaron as music editor. Michael has also worked with fellow composer David Arnold, with whom he has written and arranged on a number of projects, including Edgar Wright’s Hot Fuzz and Sherlock, the BBC television series created by Steven Moffat and Mark Gatiss, that premiered on BBC1 on 25 July 2010. Prior to work as a composer, Michael worked as a music editor with films including Peter Jackson’s The Lord Of The Rings trilogy, Richard Curtis’ Love Actually, Bridget Jones: The Edge Of Reason and Nanny McPhee. As a music editor, Michael has been nominated for 4 MPSE Golden Reel Awards, winning in 2001 for The Fellowship Of The Ring. Michael also composed the score for the film Wild Target, a romantic comedy directed by Jonathan Lynn and starring Bill Nighy, Emily Blunt, Martin Freeman, Rupert Everett and Rupert Grint. This commission followed Michael’s score for Wild Child, Working Title’s teen film released in the UK in 2009. Read more on Last.fm. User-contributed text is available under the Creative Commons By-SA License; additional terms may apply.