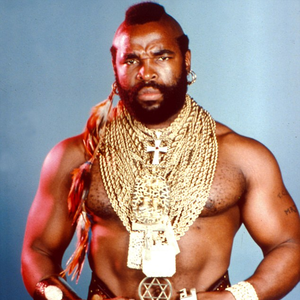 There is more than one artist under this name*: 1. Mr. T (born Laurence Tureaud on May 21, 1952) is an American actor known for his roles as B. A. Baracus in the 1980s television series The A-Team, as boxer Clubber Lang in the 1982 film Rocky III, and for his appearances as a professional wrestler. In 1984, Mr. T released an album titled Mr. T's Commandments on the Columbia/CBS Records label, much in the same tone as his 1984 educational video, which instructed children to stay in school and to stay away from drugs. He later followed up with a second album the same year, titled Mr. T's Be Somebody... or Be Somebody's Fool! on the MCA Records label, which featured music from the film of the same name. In 2002, Mr. T appeared in the video for Pass the Courvoisier by Busta Rhymes featuring P. Diddy and Pharrell. 2. Mr.T (内田智之, Uchida Tomoyuki) is a Japanese music composer who is best known for creating songs for Bemani, the music division of KONAMI. He mainly composes for the beatmania IIDX and pop'n music videogame series, and also is the manager of SLAKE. Like many Bemani artists, Uchida works under many aliases such as Mr.T, ucchie or shapes. He commonly works with his brother, 内田裕之 (Hiroyuki Uchida), under the aliases ウッチーズ (Ucchies), Mr.T と Brother Hiro (Mr.T & Brother Hiro) and Mr.T plus H. *Actually not, as one has a space in his name and the other not, but we'll make sure to please the canttagshitcaptn bandwagon. Read more on Last.fm. User-contributed text is available under the Creative Commons By-SA License; additional terms may apply.