No Frogs For Dinner 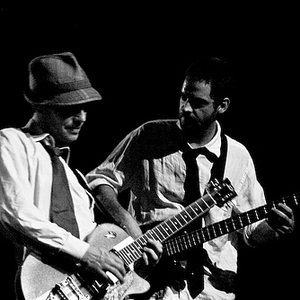 This alternative rock band including - Antoine Glomaud (Alias Tonio) - Laurent Lemonnier (Alias Lolo) - Louis Lechevalier (Alias Luigi El CHE) - Marien Glomaud (Alias Mamar) - Yann Cadoret (Alias Le Sniark) had their first performance in front of 400 people. The seventh time they went on stage together was at the Elysée Montmartre in Paris for the French final of the Emergenza. They reached second place and picked up "best performance" and "best guitarist" on their way. Formed in October 2007 this seven piece - including twin brothers - presents a truly fun pop-groove-rock'n’roll mix inspired by bands like Stone Temple Pilots, Deus, Muse or Pearl Jam. No Frogs For Dinner are very particular about their melodies and the energy in their music, which they convey convincingly on stage Read more on Last.fm. User-contributed text is available under the Creative Commons By-SA License; additional terms may apply.