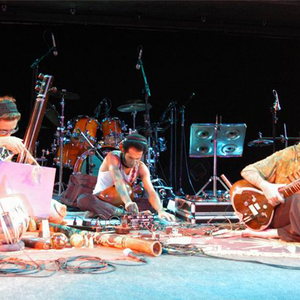 Brazil's culture is a rich mosaic of many cultures of the world. No wonder Pedra Branca, from Sao Paulo, Brazil, plays ethnical instruments and electronic timbres to create Brazilian experimental music. The band Pedra Branca performed its first songs in 2001, in the city of São Paulo. By 2003 they had achieved success with different audiences, in different regions of Brazil, which led to the release of their first album, named "Pedra Branca", with the label Chill-art and WFC Records. The record would be released in Europe in 2005. In 2006, Pedra Branca obtained visibility through television broadcasting with their prominent performance at Skol Beats Festival. The band's performance at Boom Festival, in Portugal, gained them success with both critics and audiences, marking the world premiere of their second album, "Feijoada polifônica" with Chill-art/WFC, this time with international distribution by Arabesque. In their live concerts, Pedra Branca develops improvisations among themselves and with guest musicians. The concept of "jam" includes parallel performances from dancers, actors and VJs. Pedra Branca (which means White Stone) was a Brazilian indian who became a powerful cure entity after he passed away. According to the folk myth, his spirit is able to heal human pain when he manifests during shamanic ceremonies. http://www.pedrabranca.mus.br/ Read more on Last.fm. User-contributed text is available under the Creative Commons By-SA License; additional terms may apply.