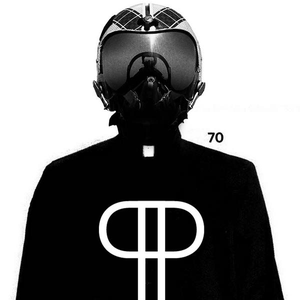 Few artists have the cult following that Toronto’s Pilotpriest does. Spawned by a bootleg of Run DMC’s “My Adidas” in 2007, Pilotpriest’s sweeping notoriety has steadily gained ground, fueled by an additional boot remixes ranging from pop to hip hop and a remix of Lioness’ “My Heart.” Through all the chatter there is one unusual thing about him. Though his tracks are coveted and his production praised time and time again, the question remains…who is Pilotpriest? Born in Ontario, Canada, Pilotpriest grew up with no musical training. Gravitating towards an organ in his family’s house, he instead taught himself how to play at the age of six, learning “Time After Time” and the music from “Tron.” “I did everything by ear,” he says laughing, “That’s why I have horrible technique when I play. When people who play piano see me they get irritated!” As he got older, his musical tastes varied from a brief interest in rap music to 80s punk, and he intently listened to everything while picking apart the layers in his brain, trying to separate the sounds and instruments in his head. Eventually, he made the decision to leave high school for two years to teach himself how to play guitar and during this time also found himself buying equipment from four-track recorders to keyboards. His first synth, a Yamaha DJX, was filled with retro house pads and Pilotpriest still uses it today (you can hear its presence in “Nighthawk”). Drawing from his influences of Air, Giorgio Moroder and rap instrumentals, he began producing songs with an 80s inspired flair and rap undertones. While many people would have a full life just pursuing one art, Pilotpriest was also deeply involved and fascinated by film from a young age, building small models that he called his “parallel universes.” By 16 he began working on films, and was creating his own just two years later at 18. To expand his job opportunities he then moved to Toronto, where he landed a job at a boutique design firm and later got hired by MTV Canada as Senior Designer, a position he still holds today. Here, Pilotpriest is able to meld both his loves - he writes the music for his MTV video productions so millions hear his music without even knowing it. From there he kept developing his sound. “I didn’t want to just make house music,” he says, “I wanted to make melodic house music.” Sounds from the likes of Grace Jones, Sebastien Tellier and The Knife started infiltrating into his works and as his skills were honed, he started seeking out gigs. One night he attended an open stage at a club, bringing his keyboard and dressed as a pilot for anonymity, inspired by an early email address he had – pilot@priest.com. Playing an electro set with just the keyboard, he became addicted to the idea of crowd recognition and having people crave his music. He eventually borrowed from the email address to create his current moniker. He then began creating bootlegs, starting with a take on Justice’s “We Are Your Friends.” That, combined with original works such as “Starscream” got him noticed locally by other DJs which then fueled his desire to continue creating music. Other boots followed, including his wildly popular take on Run DMC’s “My Adidas,” which caught the attention of his current label, Calamity Jane. Over the last year Calamity Jane has worked with Pilotpriest supporting him in developing a sound, which straddles the spectrum between the dance floor and more musical productions. His musical taste is sophisticated, producing both beautiful pieces very reminiscent of the new romantic sounds that influenced him, and dance floor stormers that would bring any club to climax. Though Pilotpriest loves having people enjoy his music, he doesn’t think of himself as becoming a superstar. In fact, contrary to most electronic artists, he would prefer working on albums instead of singles, focusing on the importance of telling a story through music. In the end, he notes, “I just want some records out, and I hope people will listen and enjoy them.” The quality of Pilotpriest’s music is second to none… while he has been a mystery, it’s now time for the world to share his music. It is rare that a talent bursts out onto the scene, but that is just what is about to happen, because when you hear Pilotpriest’s music, you know you’ve been touched by something special. Around January 2010, someone took Pilotpriest's song Body Double, and labeled it as a Daft Punk song. (that would've been on the Tron Legacy soundtrack.) When Pilotpriest noticed this; he was "Really, really flattered." moreproof.com myspace.com/pilotpriest Read more on Last.fm. User-contributed text is available under the Creative Commons By-SA License; additional terms may apply.