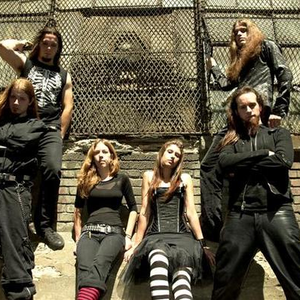 The band changed their name to BLACKGUARD, This page will no longer be updated Profugus Mortis was a black/avantgarde/folk metal band from Montreal, Quebec (Canada). Profugus Mortis was originaly formed in November 2001 by Terry, Justine and Alkin. They were, at that time, influenced by the gothic metal genre. Having auditionned numbers of different people for the bassist spot, they found out Mordred (bass), Aegis (guitar) and Keleos (keyboardist) which fitted perfectly with the style that the band was playing at that time. In August 2003, soon before their first show with local headlining band Obscurcis Romancia, Aegis was forced to leave and was replaced by a talented violonist called Emily. After a month of intense practice with Emily they reshaped all the songs for the show and the music went to another level. Now armed with their original folk death metal, the band took on the stage for the first time and received great reviews from the underground metal scene. Soon after the show, Keleos left the band for personnal reasons and was replaced by Jonathan who's power metal likings influenced the band. After doing a headlining show with Morphose, the band hit studio to record a one piece promo cd entitled United Under A Shadowed Nightsky with Yan-André Chenier. After this first studio experience, the band was ready to make some more shows. They shared the stage with many local bands including uneXpect, Blinded by Faith, Magister Dixit, Moonlyght, Howling Syn, Liva, and many more. Around august 2004, Alkin was considered more of a problem within the band and it was decided that he should leave the band. His last show was at the Foufounes Électriques in september 2004. Soon after, bassist Mordred left the band for personal reasons, and the band had to fill two spots. It is then that, after many auditions, the band met Paul who soon became their frontman. Two months later, bassist Étienne joined the band. With the great vocal range of Paul and the bass mastery of Étienne, Profugus Mortis became more unified than ever and did their first show with the new line-up at the Saphir with Moonlyght on january 8th 2005. Never did the band feel so good on stage and the chemistry from that point never ceased to improve. The band then recorded a 4 songs promo in Jonathan's basement and simply promoted themselves and gained more and more fans. After winning the first prize at the Extreme Distortion Festival held in July 2005, the band took a big step foward and allied themselves with the Euphoria Productions team. The band has already played with Finland's Finntroll and has upcoming show with Moonsorrow. Profugus Mortis is also preparing their upcoming full lenght who will be recorded in January 2006 by Québec's metal reference Yannick St-Amand, at the Studio Victor. Has of late 2008 the band officially changed their name to Blackguard due to their change of musical style (still metal). They will be on the North American leg of Pagan Fest 2. Read more on Last.fm. User-contributed text is available under the Creative Commons By-SA License; additional terms may apply.