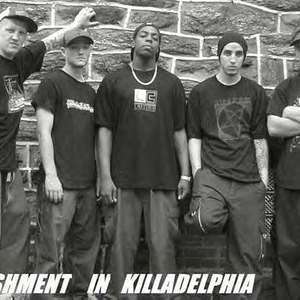 There are several bands calling themselves Punishment 1) Punishment - Cleveland, US Punishment finds WT Statler piloting a mess of late-80s synthesizers through the back catalogs of post-CBGB Suicide (think YB Blue), Yellow Magic Orchestra, and even those electronic Leonard Cohen records into a post-2000s realm of emotional honesty (via text message) and the sort of ringtone-friendly sounds James Ferraro would appreciate. 2) Punishment - Philadelphia, US Signed to the Thorp label, Punishment had more drummers then Spinal Tap. Punishment toured in stolen vans on tours booked using pay phones, calling cards and the U.S postal service. Punishment busted their ass for their friends, played everything they could and never looked back. Punishment is never dead as much as they will never be as alive as it was 2000 to 2004. 3) Punishment - Oakland, CA http://punishmentnow.bandcamp.com/ 4) Punishment - Austria Death metal band from Vienna Last-known line-up: Andreas Öcsi - Vocals Fredl aka Sic - Guitar Otto - Guitar Read more on Last.fm. User-contributed text is available under the Creative Commons By-SA License; additional terms may apply.