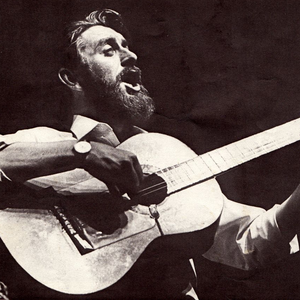 Ronnie Drew (1934 - 2008) was an Irish singer and folk musician, born in Dun Laoghaire, County Dublin, on 16 September 1934. He founded the Ronnie Drew Group, later to be known as The Dubliners with Luke Kelly, Barney McKenna and Ciaran Bourke in 1962. He was a member of the Dubliners from 1962 to 1974 and from 1979 to 1995. From 1995 on he pursued a solo career. In the fifties he emigrated to Spain to teach English and learn Spanish and Flamenco Guitar. He is also known for fronting a campaign to encourage the use of Dublin's train infrastructure - Dublin Area Rapid Transit (the DART). On August 22nd 2006 his hand prints were added to the walk of fame outside Dublin's Gaeity theatre. He has recorded with many great artists, like Moore, The Pogues, Breschi and others. On August 16 2008 Drew passed away after a long battle with cancer. He was 73. Read more on Last.fm. User-contributed text is available under the Creative Commons By-SA License; additional terms may apply.