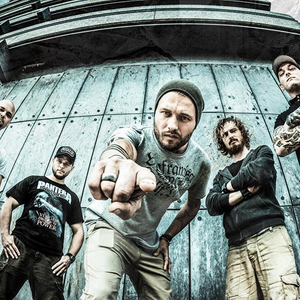 There is more than one band with the name Scamp 1) Scamp was originally the brainchild of guitarist Mads Christensen and drummer Morten Christensen. After releasing their first critically acclaimed EP, "The New Groove Complex", an additional guitarist, Kristian Bruun, and vocalist Mikael Rise was added to the line up, their creative sparring resulting in the EP, "re-draft" which was recorded at Jacob Hansen Studios (Hatesphere, Mnemic, Mercenary) and mixed at ZigZound by Ziggy (Illdisposed, Mercenary, Hatesphere) Released in 2005, it further improved Scamp's position as one of the most respected unsigned bands in the Danish metal scene. Having previously performed with Mnemic and Mercenary, Stonegard, Darkane and Evergrey, Scamp delivers unnervingly tight live sonic assaults on its audience, that, despite the highly technical polymetrics never looses its groove! "Scamp (...) delivered a killer performance, that absolutely ranges in the category of ingenious" (Danish Metal) While having developed their own unique style, Scamp has been described as a mix between Meshuggah, Fear Factory and Chimaira incorporated with intense melodic passages that adds to the atmospheric feal of the music."It can’t get any better. “re-draft” is an album of high quality death with a major twist of atmosphere." (Metal Coven) All in all, Scamp just might be the ambush you never saw coming! The press wrote: "Super aggressive tight riffs and great music, played by super musicians." (Revelationz.net) "Crank up the volume to max intensity and I'll bet you can't resist the complex grooves!" (Danish Metal Pages) 2) A Japanese D-Beat band. 3) Swedish hardcore band in the 90's. Read more on Last.fm. User-contributed text is available under the Creative Commons By-SA License; additional terms may apply.