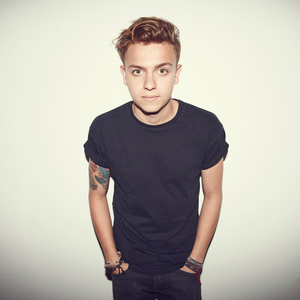 Scott Helman (born October 1, 1995) is a Canadian singer and songwriter from Toronto, Ontario. He released his debut EP, Augusta, on October 14, 2014 at Warner Music Canada. His music has been described as landing somewhere between Vance Joy and Jeff Buckley. Born and raised in Toronto, Helman graduated in 2013 from Earl Haig High School. He got his guitar for his tenth birthday and when he was 14 he knew he wanted to be a professional musician. At age 15, he signed a development agreement with Warner Music Canada where he began writing sessions with writers such as Simon Wilcox and Thomas "Tawgs" Salter. On April 6, 2014, he started putting his music on YouTube. He attended Camp White Pine in Haliburton, Ontario and Camp Manitou in McKellar, Ontario as a camper. "I want to make music that's good and makes people think and want to dance and feel things and give them value. I want people to know that they are important and that they have valuable and important things to say. Everybody is free to express themselves." – Scott Helman It sometimes feels that in the cut and paste pop world we live in, the art of the song is lost in a swirl of synthesizers and auto-tuned production tricks. But, thankfully, there are a few young artists out there whose goal it is to come to the table with something to say and create a unique voice for themselves. Rather than allowing radio formats and flavour-of-the-month styles dictate who Scott Helman is, it is his deft pen and soulful voice that defines his sound. Born and raised in Toronto, Scott's parents filled the house with music but it was a steady diet of 80's pop that didn't really connect with him. It wasn't until one rainy day at a friend's cottage that Scott had the musical epiphany that set him on his way. "I'd heard a lot of music already, but I'd never listened to The Dark Side of The Moon by Pink Floyd," says Scott reminiscing about that seminal moment. "We stole a couple cigarettes from his mom and found the album in his dad's vinyl collection. I remember just staring at the cover. From the moment it started we were speechless. I was amazed at how moved I was by the lyrics. I remember thinking, 'I want to spend the rest of my life trying to make something half as good as this.' It was kind of a crazy moment." From that moment on Scott became a sponge going back and listening to everything that had only been referenced before – the Beatles, Dylan, Young and on and on. He learned how to play guitar and he started writing songs, trying to find his own voice. For his birthday, a friend bought him some time in a studio to record a couple of demos. Terry Mosenberg, who was to become Scott's manager, arranged the studio time, loved what he heard and encouraged Scott to write and record some more songs. Those demos led Scott to a performance in the offices at Warner Music Canada where, sitting on a stool with his guitar in his lap, he filled the room with a voice that stunned all that were there. Encouraged by Ron Lopata, Warner's VP of A&R, Scott went on a writing spree that produced a plethora of songs that began to define a sound that he could call his own. "When I would say 'I don't know, I'm not comfortable or it's not me,'" says Scott, "Ron would say just trust me and do it and you can tell me if you don't like it after. At first I would go home and think, I don't know about this and then after a week, I'd go 'this song rocks.'" "I think the reason some people can find pop music boring is that they think that one song serves one purpose. Sometimes you want to kick people in the ass a little bit. A song like "Cry Cry Cry" is about a relationship but not everything is good and the bridge reflects the other side so there had to be distortion on that guitar. I think it's important to keep people interested and to keep the world of music an interesting thing." Read more on Last.fm. User-contributed text is available under the Creative Commons By-SA License; additional terms may apply.