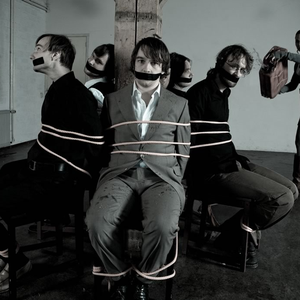 ‘..Silence Is Sexy brings nicely polished postpunk-songs. Very contemporary, with references to Editors and The Bravery.' (Gijsbert Kamer, Volkskrant 24-12-2005) www.silenceissexy.nl www.silenceissexy.bandcamp.com www.twitter.com/silence_is_sexy www.facebook.com/pages/Silence-is-Sexy/10599823379 Utrecht, The Netherlands 2003 / 2004 – Hendrik-Jan de Wolff (vocals, guitar), Pim van de Werken (guitar), Barry Spooren (bass) and Bart Reinders (drums) form Silence is Sexy (named after the Einstürzende Neubauten record). From a broad pallet of musical preferences, the band develops its sound that is compared to divergent bands like Joy Division, Sonic Youth, Placebo, Radiohead, My Bloody Valentine and Interpol. Attempts by the written press to interpret this style results in some of the following descriptions: * Darkwave / Pop * A unique infectious mixture of Noise-Punk, New Wave and shoegazer * Nice Pop songs combined with a sharp guitar-sound 2005 – The word spreads quickly when the first EP 'Silence is Sexy' is released in the Netherlands. Various national radio stations play the song 'Reptiles'. Based on the EP, music magazine LiveXS declares the band 'local hero' and they hit the stage of Amsterdam's rock-temple Paradiso. In the meantime 'Reptiles' hits the Outlaw 41 charts of the alternative radio station KinkFM. The band plays shows at various festivals and clubs. In the summer Silence is Sexy plays the two most prestigious free festivals of the Netherlands: Parkpop and Metropolis. A Dutch club-tour follows in fall, leading them to venues like De Effenaar, Nighttown, Patronaat and W2. The band has also been dubbed 'the next big thing' by digital music magazine Kindamuzik. The concert year is closed in a packed Paradiso, where the band wins the Grolsch grand prix, the oldest and most renowned Dutch rock-prize. 2006 – The début album ‘Everything you should know’ is recorded during the first months of the year. After a business conflict with an investor, the release is postponed and re-recorded in the summer with producer Martijn Groeneveld (Solo, This Beautiful Mess, Face Tomorrow). In July the unanimously well-received single 'This is our start?' is released as a forerunner for the coming album. This results in airplay and live performances on numerous radio shows on national station 3FM (Leuk is anders, 3voor12FM, Bring it on!, MoveYour Ass) and KinkFM. Silence is Sexy is called on by Dutch festivals like Metropolis, Appelpop, De Valkhof-affaire, Huntenpop and De Beschaving, and they open club shows for Kashmir, the Dears and the Gathering. In December the band has played a hundred gigs. 2007 – Silence is Sexy is nominated by KinkFM and LiveXS for a NightLiveXS Award in the 'Best live act National' category and performs during the award show. The debut album 'Everything you should know' is released in the Benelux in March by My First Sonny Weissmuller Recordings, a label run by distributor Konkurrent. '..It will only take a small step for these guys to become huge..' (Julien Cottineau, Musiqualite.net) In June 2012 the new double CD album Modern Antiques is released. Read more on Last.fm. User-contributed text is available under the Creative Commons By-SA License; additional terms may apply.