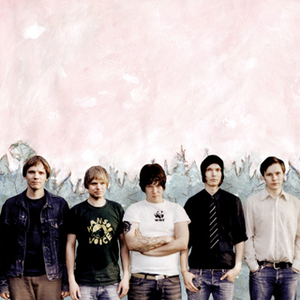 Sister Flo were a group from southern Finland, gathered together to realise their ambitions: writing songs and playing them to other people. The group consists of Samae Koskinen, Mikko Salonen, Antti Kaistinen, Jarno Alho and Janne Lastumäki. “It all started for me with a home made cd handed down in 2001. A gentle recommendation that it’s ‘my kind of stuff’. I fell in love with Sister Flo that day. There was something going on that I hadn’t really heard before from my adopted new country. Yes, there was confidence and a knowing nod to reluctant heroes, but what struck me most was the sound was fully formed and it’s own thing. I started to look for the name and see if I could catch the band live…I can’t really remember where it was where I first saw Sister Flo, but people were beginning to take notice. Then came Boys Of Cat and Landcrabs so everyone could join the party. As relationships grew, a few pointers were emerging: this was a hat band (wooly mainly). There was shyness contrasted by an aggressive protectionist perspective, a way of doing things to mask the internal fragility. Something had to be nurtured and amongst the sweetness was slight paranoia. A love for Kiss tattoos and Queens Park Rangers was hidden within. A feeling of proving one’s worth to stay involved was oddly beguiling. It was often a lot of fun. They were different. Months flew by and a drawn out process of little bits here and there resulted a long time later in Tragician’s Hat being made. These were heady times, but the wooly hatted brigade were capable of anything. I was in awe.The out of town boys played Helsinki shows and it was alwaysinspiring / intense / motronic / fuel / injected / bursts / of / character / building / excitement / jams / and / whirlwinds. Sister Flo rocked without using the conventional tools for rocking: a sigh, a hush, a brush on a snare then an explosion of noise. This characterises Tragician’s Hat as something else, whilst still delivering that overused term and requirement: timeless music.Independent being a terrible moniker for anything musical, but if that is your want, this is your high benchmark of that righteous expression, a jewel in the mire. My memory fails me as to why Sister Flo did not become world beaters (tragedy was in the air like ether). If one band were meant to ‘happen’, surely it was these guys? Looking back, it’s inconsequential, a mere footnote. Sister Flo were not put on planet earth to lead some Finnish invasion or pathe the way. Sister Flo simply mattered and sometimes that’s enough. Tragician’s Hat is all the proof you need.” Nick Triani, July 2014. Read more on Last.fm. User-contributed text is available under the Creative Commons By-SA License; additional terms may apply.