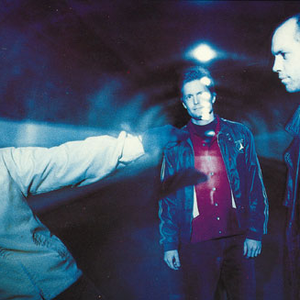 Enigmatic noise rock trio Steel Pole Bath Tub crafted a grungy, droning, offbeat sound from a palette of fuzzed-out bass riffs, blasts of guitar feedback, and tape loops, plus a raft of alternately kitschy and disturbing dialogue samples from vintage TV shows and movies. Additionally, the band had a penchant for deconstructive covers of rock classics, some of which appeared only on 7" singles. Critics were split on the effectiveness of their often repetitive compositions, with some praising their originality and others bemoaning a lack of consistent songwriting polish. A highly unlikely bet for commercial success, Steel Pole Bath Tub nonetheless managed to score a major-label contract (albeit briefly) during the alternative rock feeding frenzy of the mid-'90s. Steel Pole Bath Tub was founded in Bozeman, MT, in 1986 by guitarist/vocalist Mike Morasky and bassist/vocalist Dale Flattum. After moving to Seattle, they joined up with drummer Darren Mor-X (born Darren Morey), a veteran of the local early-'80s hardcore band Mr. Epp (which featured future members of Green River and Mudhoney). Taking their name from a feature in a true-crime magazine (a Clue-type combination of murder weapon and location), the trio relocated once again, this time to San Francisco. Steel Pole Bath Tub landed a deal with the Bay Area indie label Boner, which was also home to the Melvins in their pre-Atlantic days. The band's debut album, Butterfly Love, appeared in 1989, and was followed in 1990 by the Lurch EP (both were later combined on a CD issue). These early releases established the band's fascination with pop-culture references and TV dialogue snippets, and led to several Bay Area side projects: Morasky teamed with Boner label head Tom Flynn in Duh (aka Death's Ugly Head), and the whole group worked with Jello Biafra under the name Tumor Circus. Fans and critics tended to agree that Steel Pole Bath Tub really began to hit their stride on 1991's Tulip and its follow-up, 1993's The Miracle of Sound in Motion. During the same period, Morasky and Flattum teamed up (under the aliases C.C. Nova and Bumblebee) in an electronics-oriented side project called Milk Cult, which gave their interest in sampling a whole new outlet. 1994 brought a new Steel Pole Bath Tub EP, Some Cocktail Suggestions, which would prove to be their final work for Boner. Slash Records -- at the time a subsidiary of Warner, though they would shortly switch affiliations to London -- offered the band a major-label contract, perhaps swayed by similar jumps from Steel Pole influences the Butthole Surfers and labelmates the Melvins. Steel Pole Bath Tub's major-label debut, Scars From Falling Down, was released in 1995. Due to copyright concerns, their trademark dialogue samples had to be held in check, which placed more focus on the band's music itself. In 1996, they set about recording a follow-up, initially hoping to cover the Cars' debut album in its entirety. Slash, unimpressed with the postmodern prank and the demos of new material that accompanied three Cars covers, promptly dropped the band from its roster. Caught in limbo, Steel Pole Bath Tub gradually drifted into oblivion. The bandmembers remained active, though -- in 1997, Milk Cult received a grant from the French government to join an artists' collective in Marseilles, where they recorded an album that would be released in 2000 as Project M-13. Morasky subsequently went to New Zealand as a special effects technician on Peter Jackson's Lord of the Rings trilogy, while Flattum retired to North Carolina to pursue the visual arts while working for a software company. Morasky (now calling himself Agent Nova) and Mor-X reunited as Novex in 2002, pursuing a style similar to Milk Cult on their debut, Kleptophonica. Meanwhile, Steel Pole Bath Tub finally recovered the rights to their lost major-label follow-up, and issued the material in 2002 on the 0 to 1 label as Unlistenable (the title a quote from Slash executives' response to the tapes). The group briefly reunited that year to perform at the Beyond the Pale festival, and made another ereunion appearance in PDX in 2008. Read more on Last.fm. User-contributed text is available under the Creative Commons By-SA License; additional terms may apply.