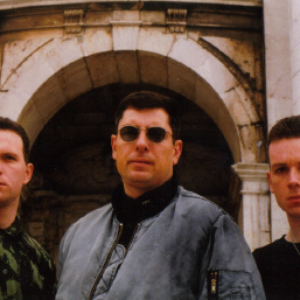 There is more than one artist with this name: 1) Strength Through Joy was founded in Adelaide, Australia in 1991 by bassist Timothy Jenn and vocalist Richard Leviathan. Although Jenn had his roots in the gothic musical milieu of Ireland and Leviathan was a bullet-belt wearing black metal fan, the two men seemed to have a lot in common and soon struck up a friendship. Although Leviathan himself had no prior musical experience before meeting Jenn, he wrote some great lyrics and had a distinctive if not good singing voice. After cutting a short demo of dark folk material, the boys in the band wrote to Death In June leader Douglas Pearce to ask his permission to send a demo to him. Pearce responded affirmatively and then pointed out that he actually lived only a little more than 10 kilometers down the road from them. Upon their meeting, Pearce agreed to produce Strength Through Joy's first album as he found himself genuinely impressed with the band's "originality." I'm not sure if that was originality he was hearing or if was hearing what Death In June had sounded like ten years earlier; even Leviathan admits "his (Pearce's) influence on the...style of music is obvious."* Either way, in 1994, Strength Through Joy released a single on vinyl called Dark Rose that featured three songs. Of note is the opener A Grave For Burning Wings on which Douglas Pearce actually sings and plays acoustic guitar, the style of the song presaging Death In June's 1996 album Rose Clouds Of Holocaust. Later that same year, Pearce produced Strength Through Joy's true first full-length album, the Force Of Truth And Lies (the title having been taken from a passage in Plato's famous dialoge the Apology of Socrates). With this album, Jenn and Leviathan develop an identity independent of Pearce while simultaneously not straying too far from the formula for apocalyptic folk music he almost single-handedly developed in the 1980s. As is always the case in this genre, the main basis of melody is the acoustic guitar, but Strength Through Joy for the most part eschewed other traditional neofolk instruments such as violins in favor of an increased role for the keyboard. With somewhat distant production and Leviathan's almost metallic voice, the Force Of Truth And Lies has a truly cold, mechanical feel to it. As I once wrote elsewhere, this album is what Kraftwerk would sound like if Rolf und Florian ever picked up guitars. In 1995, Pearce again produced a Strength Through Joy album, this one being a two-CD set called Salute To Light. Although many people seem to regard this as the superior Strength Through Joy album (there are, after all, only two) I find it really rather uninvigorating compared to its predecessor. On Salute To Light, the band fully dives into the conventions of the genre and almost every song seems unnatural in some way; like each melody was derived because scientific testing has proven that this chord ought to come after that one. While the debut album was, shall we say, gracious in paying respect to its influences, Salute To Light rather seems to want to become the band's influences. In keeping in this vein, Strength Through Joy and Death In June sat down together in 1996 in the studio to collaborate on the KAPO album. The band is officially billed as "Death In June Presents" rather than some other combination of both, but I think it suits it well considering this is more or less a Douglas Pearce album. In the same year, Timothy Jenn moved to Germany and Leviathan moved to England. Surprisingly, the band did not break up: rather it became inactive in 1997 and then changed names to Ostara which continues to this day. 2) Industrial band in the early/mid 80's. Read more on Last.fm. User-contributed text is available under the Creative Commons By-SA License; additional terms may apply.