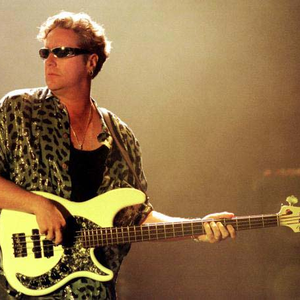 Stuart Hamm (born February 8, 1960) is a highly respected bass player, known for his session and live work with numerous artists as well for his virtuosic style of playing. He has performed with Steve Vai, Frank Gambale, and most significantly with Joe Satriani. It was under Satriani that Hamm's skill was taken out of the local San Francisco scene and into the national limelight. He currently leads his own band performing rock-fusion material. After a concert is done and his name announced, it often sounds like the crowd is "boo"ing him. They are not "boo"ing him, but rather "Stu"ing him- after a concert when Hamm's name was announced, the crowd was cheering "Hamm, Hamm, Hamm". Guitarist Steve Vai grabbed the mic and yelled "Stuuuuuuu". The yell stuck ever since. Joe Satriani notes in his Live in San Francisco concert, "They 'Stu' him because they love him". The Fender guitar company manufactures an electric bass designed and endorsed by Hamm, called "Urge". There have been two versions of the Urge in production. His slapping, popping and two-handed tapping technique (tapping on the neck of the bass, much like the Chapman Stick) may be seen on his instructional video Slap, Pop & Tap For The Bass. Read more on Last.fm. User-contributed text is available under the Creative Commons By-SA License; additional terms may apply.