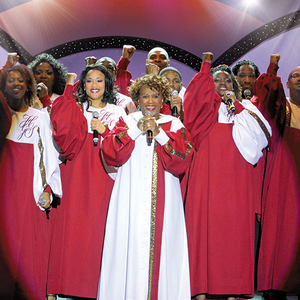 A good message, songs sung together, lifting, spiritual and explosive: when voices start to fly and hearts open – that’s gospel. It is expressed most completely when compared worldwide at concerts of the famous and original Harlem Gospel Singers. The majestic, flowing, colourful, silk robes, the powerful choir, carefully selected wonderful solo voices, first-rate musicians on organ, piano, drums, bass and saxophone: the pulsing New York quarter of Harlem – home to more than 400 religious communities and above all cradle of the rich, Afro-American culture – was the inspiration at the beginning of the 90s for establishing the Harlem Gospel Singers. Their typical, contemporary, modern, unmistakable sound is also the result of virtuoso musical excursions into the areas of blues and jazz. With no fear of “worldly influences”, choreographed perfectly towards a strong, dynamic, quick-paced firework of rhythm and passion, the Harlem Gospel Singers have been enthusiastically celebrated at concerts in Madrid, Paris and London, in Milan, Vienna and Berlin. Alone audiences of 300 000 saw the group play during a concert for the pope in Bologna. Including the metropolitan cities of Europe, the group has won the hearts of way over two million people and has triggered a real Gospel comeback – with a wave of more or less able musicians following the barrel. But even greater than their technical perfection, the miracle of this unique, emotional show is seen in the powerful display of beauty and clarity, faith, hope and all-embracing love, which is conveyed to the audience: “At the beginning, they just look at you. Then they start to move their legs and clap their hands. Then they’re up on their feet. And during the show they rush up to the stage as if they’re at a rock concert,” is how Queen Esther Marrow, superstar of the Gospel scene and founder of the Harlem Gospel Singers describes the happenings at concerts. Infectiously enthusiastic, radiating, happy faces, a heavenly musical celebration: a concert by the Harlem Gospel Singers is a rousing, intensive expression of energy-giving love – and this is what remains even once this unique musical happening has come to an end. Read more on Last.fm. User-contributed text is available under the Creative Commons By-SA License; additional terms may apply.