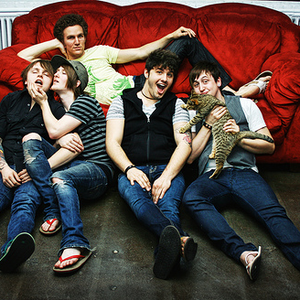 Take Cover formed in the fall of 2007 and hit the ground running. After a few months of writing, they entered the studio in the spring to record with their good friend and producer Jordan Schmidt (All Time Low, Motion City Soundtrack). Their debut self-titled EP was released that September and was followed by a first tour with Minnesota natives Sing It Loud (Epitaph Records) and You, Me and Everyone We Know (Doghouse Records). The boys were honored to begin their journey as a band with such an esteemed touring package and didn't let the momentum stop there. After touring on their self-titled EP that following winter and spring of 2009, they began the writing process for their sophomore EP "The Last Word." (Also produced by Jordan Schmidt). Following a sold out hometown release show for this EP, Take Cover hit the road once more in the summer and fall of 2009 with Quietdrive (formerly Sony Records) and The Higher (Epitaph Records). Over the winter of 2009, Take Cover began putting together an acoustic EP titled "Waiting in the Moment", consisting of both old and new songs. This online release, debuting in January of 2010, gave the fans a unique look into the versatility of the band, all the while giving the band more time to write new full band songs during the winter. The band has since been on two Midwest tours already this spring and summer and heads out on tour with MeVerseYou and The Silent Scene in late July/August. While recording and releasing new singles throughout the summer and fall, Take Cover is geared up to work their butts off bringing their energetic live show to as many new states as possible in 2010. Take Cover has also shared the stage with such acts as The Fold, William Beckett (The Academy Is), Danny Stevens (The Audition), Jamestown Story, Reel Big Fish and The Graduate. When it comes to drive, dedication, and a pure love of playing music and being on tour, these five friends are in it to win it. Keep your eyes open for Take Cover. Read more on Last.fm. User-contributed text is available under the Creative Commons By-SA License; additional terms may apply.