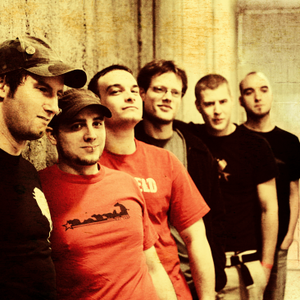 The Bandgeek Mafia is a young rising Skacoreband from Trier, Germany. With their mixture between Ska, Emo, Punk and Hardcore these Guys know how to rock the crowd. After the release of their EP in 2004, they are going to release their first album In spring 2007. “You have to have the ability to cry and laugh at the same moment – only then you are able to understand our music.“ Sticking to this motto, the band called THE BANDGEEK MAFIA declared war to the narrow-minded reality of musical philosophy. To give Ska music a completely new and extraordinary interesting shape, however unusual it may be on the first glimpse. They cleverly combine sticking melodies, powerful riffs, excellent brass and aggressive shouts and can in that way uplift themselves from a lot of bands coming from that genre. Though mixing ska music with emo elements seems to be capital sin for some guys, THE BANDGEEK MAFIA proves strikingly that such a fusion arrests one’s attention and intoxicates. The Selftitled EP (Released 2005 DIY) being promoted as a free download in the web attracted 15.000 users to get a copy. „The Bandgeek Mafia“ already played over 150 concerts in the last 4 years across Germany, Luxembourg, Belgium & Switzerland and supported Bands like MAD CADDIES, LESS THAN JAKE, MXPX, SLIGHTLY STOOPID, VOODOO GLOW SKULLS, PEPPER, THE MOVEMENT, RANTANPLAN, THE DRAFT, FU MANCHU, WATERDOWN, ITCHY POOPZKID and many more! They were on tour till August 2006 when they recorded the first full length album, including 12 new songs at the Farida Studios near Bremen(GER) with Producer Uli Wortmann. The Debut Album “PAINT YOUR TARGET” was released in April and June 2007 on LONG BEACH RECORDS EUROPE/808 RECORDS – LEECH REDDA MUSIC SWITZERLAND & ASHCAN RECORDS LUXEMBOURG/FRANCE! http://www.myspace.com/thebandgeekmafiatrier http://www.dannysucks.com Read more on Last.fm. User-contributed text is available under the Creative Commons By-SA License; additional terms may apply.