The World We Knew 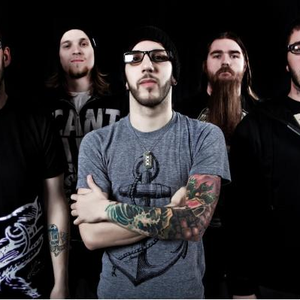 Hailing from Long Island, NY The World We Knew has been making raw and relentless metal with a hardcore aggression for the past six years. With their upcoming full-length “Death Dealer” (and first for new label The BlkHeart Group) the band have solidified their sound with elements of classic metal solos and even some rock style riffage within and occasional melodies. Vocalist Frank says “This is the first album that ALL members contributing to the writing and it is definitely our calling card. The songs are more well thought out and we wanted to make sure listeners walked away humming the riffs or choruses. Melody has always been an important part of TWWK.” Rounded out by Tim (guitar), Justin (guitar), Jesse (bass) and Jorge (drums) the band is proud working class (the title track of the album was actually inspired by Frank’s recent temp job playing a killer clown in a haunted house) and quick to point out that nothing was handed to them. Frank says “A lot of the album is about sticking up for yourself and overcoming the ‘you can’t do this’ attitude that is prevalent where we come from. Very few bands from here ever make a name outside of their town and it’s because they don’t put themselves out there or listen to all the naysayers tell them that they can’t do it. For the past six years, we just played shows regardless of what types of bands were on the bill or if we had to book our own tours and had no nice van or place to crash.” This attitude helped them in the long run, getting the attention of Seventh Dagger Records who released their debut album “Exordium” in 2007 and Jamey Jasta’s Stillborn Records who released their sophomore full-length “To The Wolves” in 2009. Speaking on the Jasta relationship Frank says “Aside from Jason and Alex at BlkHeart, Jamey and Seventh Dagger were the only industry that has shown us love. We actually ran across Jamey while we opened for his side project “Jasta” in Delaware. We didn’t speak then but a few months later, I got an e-mail in my inbox from him asking us about where we were putting out our next album. Jamey really schooled us to the industry and how to get things done.” Touring relentlessly, armed with an energetic live show, The World We Knew have been to the west coast 10 times in 3 years and done countless east coast tours. Some bands they have shared the road and stages with include Hatebreed, Winds Of Plague, Chimaira, Bury Your Dead, Despised Icon, Molotov Solution, Sleeping Giant, Betrayal and many more. The band will hit the road again in August, new tour dates at: www.facebook.com/theworldweknew Read more on Last.fm. User-contributed text is available under the Creative Commons By-SA License; additional terms may apply.