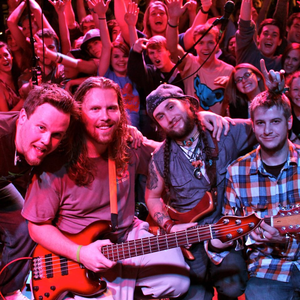 Twiddle hails from the hills of Hubbardton Vermont, and has always sought to write and perform music that is diverse and groovin', but also intricate and expressive. In the relatively short time since forming, this quartet's music and songwriting has progressed by leaps without bounds, earning them steadily growing recognition. While tapping many parts of the globe for diverse musical and cultural influences, Twiddle maintains a vibe of modern rock and funk with traditional jazz, classical, reggae, and Latin overtones -- all in the spirit of intertwining improvisation and structure. The band has been able to kick back and find itself at home on whatever stage they've played on, be it at a club, college, downtown park, historic theatre, or rowdy festival. Twiddle's shows are always high energy, but with plenty of time, tempo, and mood changes to keep the ears engaged and the brain wondering what's next. Read more on Last.fm. User-contributed text is available under the Creative Commons By-SA License; additional terms may apply.