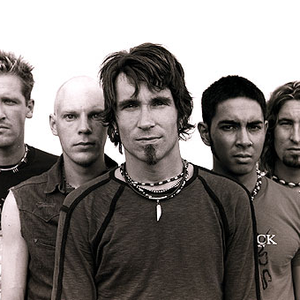 Vonray (formerly known as VonRa or Von Ra) is an Orlando, FL, quintet with a straightforward sound indebted to the arena-ready rock of early Pearl Jam. Discography : - Panes (1997) - Von Ra (1999) - Fame (2001) - Vonray (2003) http://www.myspace.com/vonray Members : The band includes vocalist/guitarist/band namesake Vaughan Rhea; his brother, Dave Rhea on bass; rhythm guitarist Garret Coleman; lead guitarist Todd Hackenburg; and drummer Jeff Irizarry. Growing up in rural Tennessee, Vaughan Rhea's music sensibilities were shaped by LPs in his parents' record collection from songwriting heavyweights like James Taylor, Harry Chapin, and Cat Stevens. Deciding that Nashville already had too many wagons without a hitchable star, Rhea instead moved to Orlando, FL, and began playing the pub circuit as an acoustic solo act. But the soaring vocals and guitar-heavy sound of Pearl Jam's Ten made a huge impression on Rhea, and soon he had made the turn toward a more rocking sound. Vaughan and his brother, Dave, assembled a band, began to gig regionally, and were soon supporting such national acts as Third Eye Blind and Seven Mary Three. In 1997, Vonray released its debut, Panes. It was successful, and two years later the band re-released it, this time with four new songs. Producer Brett Hestla noticed the hoopla around the group, both in Orlando and regionally, and brought them in to record four new songs for an EP. The songs were shopped to the majors, and soon Elektra bit. A summer 2002 tour with fellow musical travelers and Floridians Creed followed, and in April 2003 Elektra released the band's self-titled debut. The LP gained valuable exposure when lead single "Inside Out" was included on the soundtrack to the WB Network's Smallville. ~ Johnny Loftus, All Music Guide http://www.myspace.com/vonray Read more on Last.fm. User-contributed text is available under the Creative Commons By-SA License; additional terms may apply.