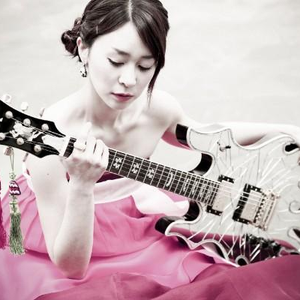 Cho Youjeen was born and raised in Korea. She attended school there and met the people who would later become the band Cherry Filter in 1999. The first album of Cherry Filter was released in 2000. She is fluent in Japanese, Korean and English and uses all three languages in her solo work. However, most of her solo lyrics are in Japanese. In 2001, Youjeen temporarily left Cherry Filter to pursue a solo career in Japan, where she released music with the help of ex-LUNA SEA member J and The Foo Fighters' Franz Stahl. She released 5 singles and 2 albums over the course of two years. After the release of her second Japanese album BEWITCH, her activities in the Japanese music scene ceased, nevertheless Youjeen is still active in Korea as part of Cherry Filter. She loves collecting dolls, reading books, designing accessories, playing card games. Her speciality is fortune-telling by tarot cards and horoscopes. Youjeen is known for her accuracy in fortune telling within the celebrities' community. Her favorites are color violet, silver, hysteric glamours, Vivienne Westwood, coffee, hot and spicy food, beaches, swimming, the smell of coconut, though she does not enjoy eating it. She also enjoys watching Quentin Tarantino's movies, Stephen Chow's movies, and reading fantasy & SF novels and loves all the music in the world. Read more on Last.fm. User-contributed text is available under the Creative Commons By-SA License; additional terms may apply.