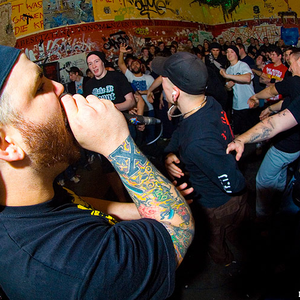 xBishopx, originally known as Diary of a Corpse, formed in 2004 as the sum expression of friends from various bands(singer from Remembering Never) hanging out and writing together. What formed is an honest, frustrated and impassioned straight-edge hardcore band, one of the last of a dying breed. Bishop's debut album 'Suicide Party' raged its way to life on January 10th of 2006. Focused more on social politics and the message than on fame, Bishop embrace their hardcore roots and hope to breathe life into a subculture that might soon forget where it came from - Music not just for music's sake, but music with a meaning and a message and a purpose. With a sound reminiscent of Terror, Hatebreed and Straight Edge Hardcore before them (Side by Side, Alone In A Crowd) Bishop's 'Suicide Party' , recorded at Eulogy Records studio - Southern Noise Studios, by Jonathan Nunez, cuts straight to the point - 14 tracks of frantic hardcore start to finish. In the words of the band - "xBISHOPx was formed for sheer fun and for the love of hardcore, crucial head walks, stage dives, sing-a-longs, you know the drill. Pretty pissed, but not brutal." Read more on Last.fm. User-contributed text is available under the Creative Commons By-SA License; additional terms may apply.