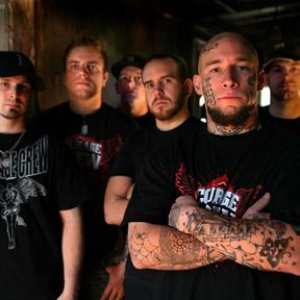 xTyrantx is: Vocals- John, Dave Guitar- Terry, Matt Bass- Scott Drums- Grant With lyrics like, “I kill for straight edge” and “Strong I stand, with no shame,” the band wears their lifestyle on their sleeve, something too many bands abstain from these days in favor of commercial success. This Motor City hardcore band formed in 2003 from the ashes of xTrephinex, Driven by Fire, Provoke, and King of Clubz and quickly became one of the most brutal and olemical bands in the area. Although not touring extensively, they’ve left their mark locally and promise to bring their heavy breakdowns and confrontational lyrics to any scene they play. A unique six-member line up ensures not only a crushing wall of guitars, but also a diverse vocal arrangement that delivers the band’s militant straight edge stance with ferocity. After hearing the band’s self-titled demo in 2004, Seventh Dagger Records quickly made plans to release a full-length the following year. The marriage between Seventh Dagger and xTyrantx was consummated by a passion for straight edge and “Welcome to Hell” was the couple’s hate-filled offspring. In an increasingly glamorized and commercialized hardcore scene, where bands would rather parade around on stage like David Bowie instead of confronting the morally bankrupt society that we live in, xTyrantx will be a welcome despot to the angry youth that still remain. Read more on Last.fm. User-contributed text is available under the Creative Commons By-SA License; additional terms may apply.