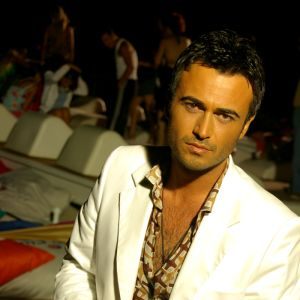 Kutsi (16 March 1973, Malatya), whose real name is Ahmet Kutsi Karadoğan, is a composer, song writer and a famous Turkish pop singer. In 1992, he came to Istanbul with a demo including his own composes. Although he failed to draw attention by producers at first, he managed to release his debut album " Aşk Payını Aldı (Love got its share) " in the year 2000, which was made possible by Erol Köse's discovery of Kutsi. He released his second album "Sana Ne ( None of your Business )" in 2005. In 2006, he starts his acting career in the tv series "Doktorlar (Doctors)". Meanwhile, he maintains his success in the music world with his latest album called "Aynı Şehirde Nefes Almak Bile Bana Yetiyor (Even breathing in the same city is enough for me)". What makes this album different from the others is it being recorded live accompanied by İstanbul Devlet Senfoni Orkestras without any electronic or computer generated sounds. Read more on Last.fm. User-contributed text is available under the Creative Commons By-SA License; additional terms may apply.