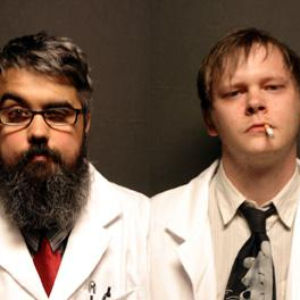 There are at least two artists that have used the name Larvae: 1) Larvae is the brainchild of Atlanta, Georgia resident Matthew Jeanes. The project began in 1998 as Jeanes' attempt to break away from traditional songwriting and music-making with bands. As he left the world of lyrical songwriting and traditional performance behind, Larvae emerged as a mixed media project that incorporated Super 8 films, toy video cameras, music, and graphic design. Larvae quickly expanded to include Jeanes' longtime friend and collaborator Bryan Meng, who focused on the film and video aspect of Larvae live shows. After successful projects involving short films that the group shot themselves, Larvae honored their namesake by producing a musical performance homage to the Toho films of Godzilla. The result caught the attention of Berlin-based music label Ad Noiseam and Larvae's first EP, Monster Music was released in 2003. The EP was followed closely by the full length album, Fashion Victim, and the addition of musician and sound designer Chris Burnett. With Fashion Victim, Larvae attacked consumerism through a set of songs and culture jamming videos that poked fun at product placement, globalization, and the fashion industry. After tours of the United States and Europe in 2004 and 2005, Larvae returned to the studio to produce yet another film-related homage, this time in the form of a love letter to the Star Wars universe. The Empire EP spawned another set of videos in which the group paid tribute to the far-reaching cultural impact of the Star Wars films while also taking shots at the consumerist nature of the marketing machine behind the saga. With a break from touring, Jeanes set out to reconnect with the emotional side of music that had sometimes been lacking in the more dance-oriented tracks produced under the Larvae name. After a year of writing and recording, the result was Larvae's most personal and most diverse release to date, Dead Weight. While Larvae had begun as an attempt to move away from voices and traditional instruments, Dead Weight saw the group experimenting with guitars, lap steel, and organs, while inviting a range of guest vocalists to contribute to the album. As the group set out to make videos for a new live show centered around the new album, they returned to home-shot videos and films to capture the more intimate nature of the music. In 2008, after a long break, Larvae returned with a set of EPs collected on a single album called Loss Leader. Clearly heading in two directions at once, Jeanes combined the emotive songwriting and guitar-based composition style from Dead Weight with the more electronic and playful style of Empire and Monster Music to produce an album in two parts. Monster Music 2 allowed Jeanes to further explore his love of Kaiju films with tributes to the Toho monsters, while the more subtle Turning Around tracks traced a difficult path of personal ups and downs. With Loss Leader and a new set of videos featuring Lego Animation, Godzilla mashups, and more Super 8 footage, Larvae continues to evolve into an act that is at once playful and serious. Through it all, Jeanes refuses to be pinned down to a single sound or style, but listeners and concert attendees can be sure that the music will always reach out and the videos will always entertain. 2) Larvae is a Black/Doom Metal band from Oakland, California. Features ex-members of Elk, Beercraft. http://larvae-oakland.blogspot.com/ http://www.facebook.com/pages/Larvae/240711775983398 Read more on Last.fm. User-contributed text is available under the Creative Commons By-SA License; additional terms may apply.