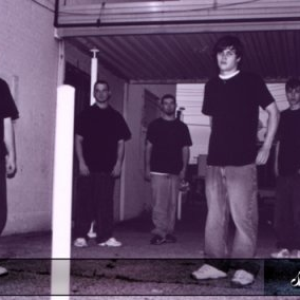 Shun has been a band for around four years, and throughout those years they have learned what it takes to try and make a stand in a hard business; it takes severe determination and the talent to succeed, these are two things that Shun knows they have. Since they all grew up together they have always known what they wanted to do, the only thing left to do was do it, and three years ago that is what they set out to do. With them all being in their early twenties, they know what is coming up for the music of tomorrow and have already had time to accomplish the sound of the future. The band consist of five friends, not just members, starting with the vocalist, Billy White, who with his own unique style of vocals carries the songs emotion and touches you with his passionate lyrics. Going on to the guitars that are lead by David Crutcher and Cris Hawkins, who serve as the backbone of the ambiance and heaviness. On bass is Richie Glover, who is in a sense holding it all together, with his melodic bass lines. Finishing the line up is their drummer, Jac Glenn, with his powerful and tripnotic beats, making the bands total sound that one minute have you staring wide-eyed to nowhere, and the next minute will have you singing along to a melody that just won't go away. Shun is the only band in today's music scene putting this emotion and dynamics into their songs to create a style not yet seen in music today. They tend to stay away from trendy beats and originate their own style instead of imitating others. Shun has played many shows covering the southeast from Nashville to New Orleans, playing with many known bands such as The Urge, Stuck Mojo, and Nothingface. By playing with these bands shun was able to develop their name throughout the Southeast. Releasing a locally recorded demo in December of 1998 they sold over 1200 copies and have been on several college stations and the local buzz 102.9. Shun has set out to be the next wave of long lasting music with a sound completely original yet familiar and with an intelligence level strong enough to capture both young and old. Shun will be pressing their new style until dreams and destiny are accomplished. Shun has released 2 CDs. An EP entitled Promising (2000) and a full-length titled Michael In Reign (2001) Members: Billy White: Vocals David Crutcher: Guitar Cris Hawkins: Guitar Richie Glover: Bass Jac Glenn: Drums MySpace: www.myspace.com/shunband There are multiple groups named Shun, but one belongs to the legendary Japanese electronic mastermind Susumu Hirasawa. Hirasawa's group made experimental electronic music during the 80's similar in vibe to Susumu's other work, but with a more hypnotic compositional style. Read more on Last.fm. User-contributed text is available under the Creative Commons By-SA License; additional terms may apply.