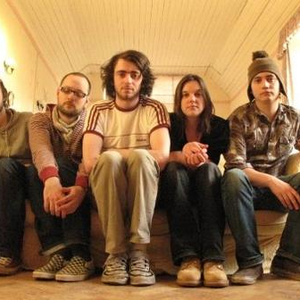 Spokes are a band based in Manchester and Newcastle (UK), brought together in 2006 by a combination of boyhood friendships, family ties and a relentless love of recording and touring. Critics have praised them for their grand sound, buoyed by bittersweet joy and devastating lows. While sounding like a band with much more than 5 members they go from euphoric noise to moments of intense stillness. While drawing upon folk, shoegaze, slowcore and post-rock their music is always distilled down into something distinctly their own. In 2007 they recorded their debut EP People Like People Like You which combined their off-kilter indie with more flowing structures influenced by post-rock and classical music. And it sold out quickly. The release also lead to an appearance on the main stage at the Big Chill festival where People Like People Like You quickly sold out at the Rough Trade stall. They also won the Sound 2008 competition and played at Rockness. This frenzied activity eventually caught the attention of Ninja Tune (and XFM who had them as a new band of the year) and their indie imprint Counter Records, who re-released People Like People Like You in the spring of 2009. Having played at the End Of The Road festival in the summer Spokes then returned to their countryside residence somewhere in the North-East of England to finish work on their first album proper. This time introducing intricate vocal harmonies and more complex arrangements. Spokes' meticulous attention to detail and feel lends their songs a lush sound that has a clear respect for the classics, taking inspiration from artists such as Neil Young and Kate Bush. The song 'Torn Up In Praise' was taken from early recordings for the album and included in the Counter Records sampler, it was warmly received by Clash magazine for it's grand take on indie-rock. Similarly, when NME chose to run a feature on the Ninja Tune label a Spokes demo entitled simply as 'Daisy' was included as a featured download alongside label-mates Jaga Jazzist and Andeya Triana. 'We Can Make It Out' is the first single to be lifted from the upcoming album 'Everyone I Ever Met', and it's unique choral vocals typify the energy of the record as a whole. It comes with a video by director Dan Lowe who himself has already achieved notoriety with a promo for Field Music which was nominated by RADAR for best budget video last year alongside luminaries such as Spike Jonze. The single is expected to be released in November this year with launch dates in London, Newcastle and across the UK. Read more on Last.fm. User-contributed text is available under the Creative Commons By-SA License; additional terms may apply.